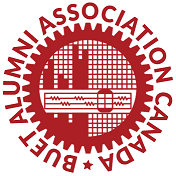 Desk Report: Bangladesh can now manage multi-billion dollar development projects at ease, thanks to high GDP growth and local engineers, many of whom are from BUET (Bangladesh University of Engineering and Technology), the country’s top citadel of learning.
These remarks were made by Prof Jamilur Reza Choudhury in Toronto, Canada, while addressing a group of around one thousand expatriate Bangladeshi engineers and architects on Sept 8 as the chief guest at the BUET Night, an annual gala event of the BUET Alumni Association Canada. The event was held in Markham Convention Centre at the east end of the city.

“You all know that the World Bank cancelled a loan of $1.5 billion it promised for Padma Bridge. The global lender’s decision paved the way for Bangladesh to build its capacity in handling mega projects like Padma bridge,” he said.

“Some graduates from BUET who are now working in international companies became members of the international panel of experts for the mega projects,” he added.

“For the first time local experts have been given full responsibility for overall project management,” said the National Professor.

The Chairman of the International Panel of Experts on the Padma Bridge project, Prof Choudhury noted that the Bangladesh government took up a very big challenge to implement the project after a fallout with the World Bank and other international lenders due to the alleged involvement in corrupt practices by a Canadian firm.

He lauded Prime Minister Sheikh Hasina for her bold decision to take up the challenge and implement this huge project with ‘our own resources and with our engineers being in overall charge of the management of the project’.

Professor Choudhury said, “This was a huge challenge and considered as a game changer for future projects.”

‘If we can complete this project successfully, I am sure, in future, the government will depend more and more on our own engineers and other professionals to manage the projects,” he said amid applause from hundreds of engineers, many of whom were his students and came from other cities of Canada and neighboring USA.

He mentioned that a former BUET graduate, currently working in San Francisco, has been inducted in the international panel of experts for his expertise in projects of similar scale and importance.

He said the government was now ready to place its confidence in Bangladeshi engineers, including those who gained similar knowledge and expertise in other countries.

He advised the association to prepare the database of all the members who are working in different fields in Canada so that they can easily access the database and select professionals who may be called upon to provide their expertise in large infrastructure projects in Bangladesh’.

Professor Choudhury also said work was being undertaken for accreditation of Bangladeshi degres and academic programmes under the Washington Accord. Currently, 20 countries are signatories to this accord, and Bangladesh has been given ‘provisional’ status.

He sought help from alumni members who are currently working as academics in universities so that the country could achieve full status by 2020. Given a full status, the engineering degrees and programmes accredited by local Accreditation Boards will be similarly accredited by all the signatory countries in the Accord.

The event was presided over by Dr. Delwar Hossain, President of the Association. The event started with the national anthems of both Bangladesh and Canada being played and was officially opened by Kamrul Islam, the Convenor of the event.

Amongst others who spoke on the occasion were Dr. Bakte A. Kamal, the most
senior alumnus from the early 1960s, and Md. Abdur Rauf, a Trustee and Executive of BUET Alumni, the central association based in Dhaka, who accompanied Professor Choudhury from Dhaka to attend the reunion of its chapter association in Canada.

The Association accorded a reception to a daughter of an alumnus, Mirza Nahiyan, who made it to the list of top scholars in the Toronto District School Board last year. Dr. Choudhury congratulated Nahiyan Mirza for her extraordinary success and presented her with souvenirs on behalf of the Alumni.

The Association also honoured a dozen faculty members who are currently teaching at Canadian universities all over Ontario Province.

The event was rounded off by a gala dinner and a magnificent cultural show. ***