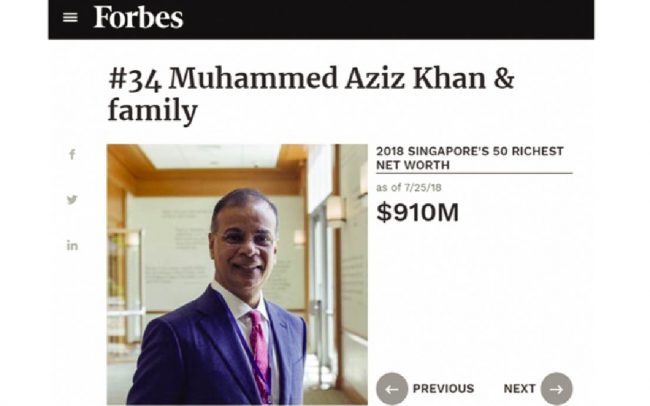 M Humayun Kabir: Summit Group Chairman Muhammed Aziz Khan is among Singapore’s richest people, according to a 2018 list published by Forbes.
Khan, with $910 million net worth, ranks 34th among 50 richest people in the city state, it said, reports bdnews24.com.
A Singapore permanent resident, Khan, 63, who has interests in power, ports, fibre optics and real estate, is planning to list Summit Power International on the Singapore exchange.
His daughter, Ayesha Aziz Khan, runs Summit Power International, a Singapore-based company. It now holds assets of at least 17 power plants in Bangladesh with total generating capacity exceeding 1,644 megawatts.
According to the company’s website, Summit Power, originally established in Bangladesh as its first independent power producer in 1997, reflected 21 percent of Bangladesh’s total private installed capacity and 9 percent of total installed capacity as of 2017.
The Forbes list published on July 25 was compiled using shareholding and financial information obtained from the families and individuals, stock exchanges, analysts and other sources.
Unlike Forbes’s billionaire rankings, this list includes family fortunes, including those shared among extended families such as that of Hong Leong Group’s Executive Chairman Kwek Leng Beng and his cousins.
According to the report, net worth is based on stock prices and exchange rates as of the close of markets on July 13. Private companies were valued based on similar companies that are publicly traded.
There are three newcomers to the 2018 list, and Khan is one of them.
Forbes mentioned in its report that his source of wealth is power and self-made.
Khan, son of an army officer, is the younger brother of former commerce and aviation minister Faruk Khan, a member of the ruling Awami League’s presidium.
His name appeared in the Offshore Leaks Database published by the International Consortium of Investigative Journalists.