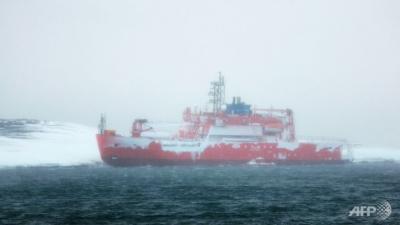 An Australian icebreaker that ran aground in Antarctica during a blizzard has been refloated, officials said Saturday as they work to bring the vessel’s expeditioners home.

The Aurora Australis ran aground with 68 people on board after breaking its moorings on Wednesday and was stuck on rocks at Horseshoe Harbour, close to Australia’s Mawson station.

“The Aurora Australis was successfully refloated and is now out of Mawson harbour,” director of the Australian Antarctic Division Nick Gales told reporters in Hobart.

“It is going to remain in the vicinity of Mawson harbour for a few days while the P&O crew conducts a very thorough assessment of any damage that has occurred during the event.”

“Importantly there is no evidence that any oil has been spilt or any pollution event has occurred,” he added.

The 37 expeditioners onboard were rescued by barge Friday and taken to Mawson station, while the crew remained to refloat the ship, which is owned by P&O Maritime Services, using its ballast system and work boats.

Shaun Deshommes, P&O Maritime’s operations manager, said it would take up to three days to fully assess the damage to the boat’s hull, including using underwater cameras.

“The breach is relatively small,” he told reporters at a press conference with Gales, adding that only a small tank had been damaged.

“It is not affecting in any manner the stability or the safety of the vessel.”

It is expected that the boat, which is capable of breaking ice up to 1.23 metres thick, will journey back to Australia for repairs.

Gales said the Australian Antarctic Division was engaging with other Antarctic programmes on how to bring the expeditioners back to Australia.

The United States Antarctic programme has already agreed to take more than 30 expeditioners from another of Australia’s stations, Davis, to Casey station, some 1,500 kilometres (950 miles) away, by plane later Saturday.

That group had been scheduled to return to Australia on the Aurora
Australis after a southern hemisphere summer in Antarctica. They are now expected to be flown home on an AAD plane in the coming days.

Gales said Australia would consider the assets of other countries active in the region — including France, the United States, South Africa, China and Japan — before deciding on the best option to bring the expeditioners at Mawson home.

Saying it was like an “international jigsaw puzzle”, Gales said Australia would seek to minimise disruption to other nation’s programmes.

“We really try and look for the most efficient and effective and safe way to respond to the situation that minimises impact on other programmes as well as is able to give us the assistance we need,” he said.

Australia’s Environment Minister Greg Hunt thanked the “broader Antarctic community” for its help given the dangerous and hostile environment.

In a statement, Hunt also thanked “the many nations which have been quick to offer logistical support to the Australian Antarctic programme”.

Several countries have territorial claims on Antarctica, viewed as a potential future source of huge mineral resources, although under a 1949 agreement the frozen continent is designated a scientific preserve.