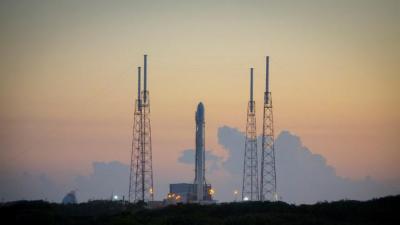 In the very last second before liftoff Sunday, SpaceX scrubbed the launch of its Falcon 9 rocket to send a communications satellite into orbit, marking the third delay since last week.

A fuel problem forced the sudden delay, following a postponement — known as a hold — earlier in the evening due to a ship that ventured into the waters off Cape Canaveral, Florida, said SpaceX CEO Elon Musk.

The Falcon 9’s engines are powered by liquid oxygen and kerosene. In June 2015, the Falcon 9 exploded some two minutes after launch, a failure that was blamed on a faulty strut that held helium bottles in place.

The ship moved away in time for a launch attempt, and the countdown went almost to ignition before it was cut off suddenly.

“We were counting down, we got to just about T-0 when we had an abort,” at 7:21 pm (0021 GMT) said SpaceX spokesman John Insprucker on the California-based company’s live webcast.

Another launch date has not been set, and the vehicle is safe, he added.

The launch aims to propel a communications satellite, known as SES-9, that was built by Boeing for the Luxembourg-based company SES.

The satellite must reach a geostationary orbit, more than 22,000 miles (35,000 kilometers) above Earth, where it will deliver broadband and television channels to southeast Asia.

“We will be dropping SES-9 off 100 times as high as the International Space Station,” said Lauren Lyons, mission integrator for SpaceX.

After the launch, SpaceX had planned to try to land the first stage of its rocket on a platform floating in the Atlantic.

SpaceX has managed to land its Falcon 9 upright on solid ground once — in December 2015 — but several attempts at ocean touchdowns have failed.

SpaceX has cautioned it does not expect a successful landing this time either once the launch finally takes place, but is trying to perfect its technique of recycling rocket parts in order to make spaceflight cheaper and more sustainable.