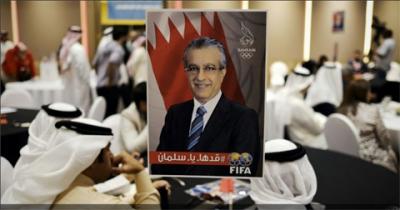 Asian Football Confederation (AFC) head Sheikh Salman, gunning to become FIFA’s first Asian leader, had been the pre-poll favourite but he lost out in the second round of voting.

The Bahraini royal had repeatedly denied claims of complicity in human rights violations during a crackdown on pro-democracy protesters in his home country, calling them “nasty lies”. He warmly embraced Swiss-Italian Infantino after the election result and later said in a statement that the AFC “looks forward to working with the new-look FIFA”.

He added: “The new FIFA needs to become more inclusive and reflect the
diversity of world football. I trust Gianni Infantino will provide the
leadership to achieve this, as well as the rest of the reforms that are now urgently needed.”

Sheikh Salman’s defeat is a blow to the ambitions of Asia and especially the Arab world, where there had been anticipation of a powerful new voice in sport.

The AFC has been a staunch supporter of the Qatar 2022 World Cup, whose controversial bidding process was at the heart of the crisis which engulfed FIFA and prompted Friday’s poll.

Sheikh Salman enjoyed firm backing among the Asian voters, including the 10-member East Asian Football Federation which confirmed its support just before the election.

The East Asian bloc includes powerhouse China, which aspires to host and even win a World Cup and has been splashing out on top players for the Chinese Super League.

India, another supporter of Sheikh Salman which hosted the annual AFC
awards in November, said it hoped to receive “due importance” under
Infantino.

“I am sure FIFA under the able leadership of Mr Infantino would continue to give India its due importance and co-operation for the development and promotion of football,” All India Football Federation vice-president Subrata Dutta told AFP.

Infantino’s election was warmly welcomed by Australia, an AFC member since 2006, despite its earlier announcement that it would vote for Jordan’s Prince Ali bin Al Hussein.

“Today was the best day FIFA has had in many years,” Football Federation Australia chairman Steven Lowy said in a statement.

“The mood for change was in the air and the congress voted overwhelmingly to move forward with a new structure and new leadership to implement it.”

New Zealand, from the 11-member Oceania Football Confederation, confirmed that it voted for Infantino after meeting the candidates in Zurich before the vote.

The election result made headlines around the region, with Hong Kong’s
Apple Daily splashing “End of the Blatter dynasty”, referring to suspended former leader Sepp Blatter.