Take a case in point, with global implications: Trump has repeatedly bragged about his willingness to use nuclear weapons. American democracy is in crisis, and not just because of Trump 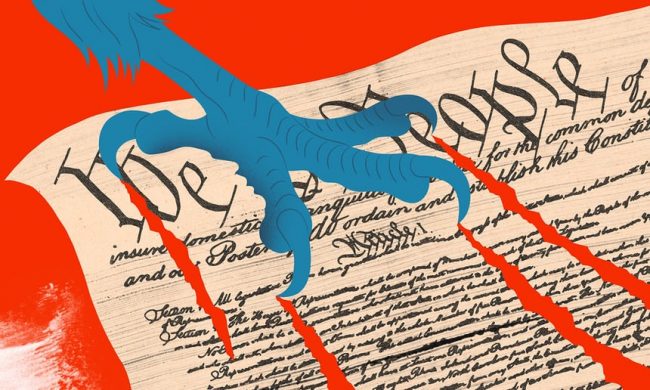 Nineteen months into the Trump presidency, US democracy is running into serious trouble – but it is not all, or even mostly, Donald Trump’s fault. This crisis of governance has been building for decades. It is only now, as Trump’s iconoclastic assaults on established beliefs, laws, institutions and values test the system to destruction, that the true scale of pre-existing weaknesses and faultlines is becoming apparent.
This deep crisis of confidence, bordering on national meltdown, comes as the US hurtles towards midterm elections in November – a familiar American ritual now rendered strangely unpredictable by fears of foreign manipulation and an FBI investigation that could, by some estimates, lead ultimately to Trump’s impeachment. The process of degradation affects US citizens and all those around the world who hold up the US democratic system as a paradigm worthy of emulation. Friends worry that the country’s ability to sustain its traditional global leadership role – moral and practical – is being undermined. Enemies, principally anti-democratic, authoritarian competitor regimes in Russia and China, hope this is so.
Take a case in point, with global implications: Trump has repeatedly bragged about his willingness to use nuclear weapons. As commander-in-chief, he oversees the world’s largest nuclear arsenal. Last year he threatened to “totally destroy” North Korea, a nation of 25 million people. He has also threatened Iran. Such lunatic recklessness appals many Americans. But it transpires there is little they could do to stop Trump should he decide, on a whim, to press the “nuclear button”.
Checks do exist. There is a chain of command that cannot be bypassed. But security experts say nobody, not even the secretaries of state and defence or the chairman of the joint chiefs, has legal power to block a presidential launch order. What could be less democratic? Yet this dilemma was not created by Trump. It has existed for many years. Congress is now belatedly reviewing it.
Trump’s frequent use of “executive orders” has provided another wake-up call. Most infamous was his travel ban on people from seven Muslim-majority countries, but others – concerning his Mexican border wall, his unilateral imposition of steel tariffs, and his reversal of Barack Obama’s Affordable Care Act – were also highly contentious. Yet, once issued, such orders are rarely overturned. After numerous legal challenges, the supreme court upheld the travel ban.
Many were shocked to discover that a US president could issue diktats and fatwas like the worst kind of unelected despot or ayatollah. But the use of such orders, avoiding public scrutiny, is long-established. Franklin Roosevelt interned Japanese-Americans after Pearl Harbor by this means. Abraham Lincoln’s emancipation proclamation ending slavery was an executive order. In exercising this arbitrary power, Trump is following precedent, however undemocratic.The expanding powers of what the Vietnam-era historian Arthur Schlesinger dubbed the “imperial presidency” is a long-recognised phenomenon and one that Congress, America’s primary constitutional pillar, has signally failed to curb over the years. This may be one reason why Americans, according to polling going back decades, exhibit a consistently low opinion of Congress. But there are many others. The dominant two-party system, virulent partisanship and out-of-touch politicians are blamed for chronic failures of governance. The advantages conferred by incumbency are overwhelming; most members are repeatedly re-elected, reducing democratic choice. In terms of the presidency – the second constitutional pillar – systemic problems produce even greater anomalies. Trump was the fifth president to win office despite losing the popular vote, thanks to the archaic, unaccountably unreformed electoral college process.