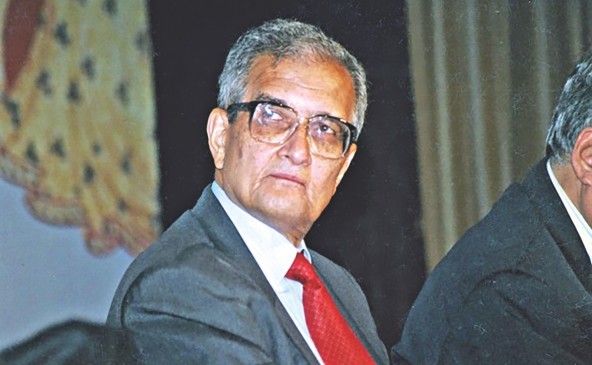 The Guardian:[2] Nobel Laureate Amartya Sen has been virtually conferred the Peace Prize of the German book publishing trade at the Frankfurt fair.
[3] Sen, 86, received the honour yesterday via livestream from Boston in the US. He is the first Bengali to get the award, reports our New Delhi correspondent.
[4] German President Frank-Walter Steinmeier was scheduled to speak at the opening ceremony of the Frankfurt book fair which was held online this year due to Covid-19 but he could not do it as he had to go into quarantine after one of his bodyguards had been diagnosed with Covid-19.
[5] Actor Burkhard Klaussner, who filled in for Steinmeier, read out President Steinmeir’s prepared speech in which the latter said Sen’s works “broke the bounds of academia by not only grasping the workings of the world but actively wanting to change the world itself.”

“And Amartya Sen has succeeded in changing it,” the speech read. “He writes against the inequalities and injustices of this world.”

Describing Sen as a “citizen of the world” and as a “moral authority”, Steinmeier said the economist’s “lifework embodied ideas pertaining to global justice like no other.”