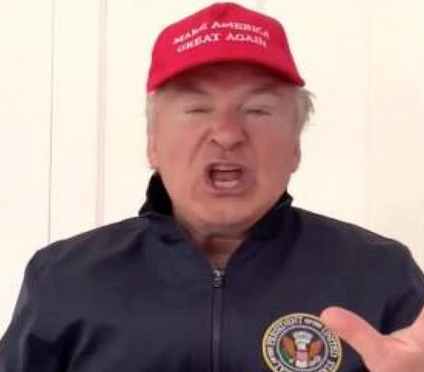 CNN: [2] Alec Baldwin being stuck at home didn’t stop him from playing President Donald Trump one last time this season.
[3] The season finale of NBC’s “Saturday Night Live,” which took place remotely, opened with Baldwin’s Trump acting as the keynote speaker for this year’s graduating class of seniors.
[4] “Hello, everyone, I’m Principal O’Grady. Welcome to the St. Mary Magdalene By The Expressway class of 2020 virtual graduation,” Kate McKinnon said to a zoom conference of the entire class playing students. “I know this isn’t how you expected your high school career to come to an end, but we’re all making sacrifices. I have had to share my child’s Adderall with him.”
[5] McKinnon’s principal told the class that she tried to get the class’s preferred speakers of former President Barack Obama and former first lady Michelle Obama, but they said no as did the next five choices.
[6] “So I moved on to your eighth choice, receiving one vote, President Donald Trump,” she said.
[7] Baldwin’s Trump, wearing a red “Make America Great Again” hat, appeared on the call from home.
[8] “Congratulations to the class of Covid-19,” he said.
[9] Baldwin’s faux president told the class that he was honored to be their “valedictator.”
[10] “But today’s not about me, it’s about you,” he said. “Although I should spend a little time on me first because I’ve been treated very poorly, even worse than they treated Lincoln.”
[11] One of the students, played by Chris Redd, pointed out that Lincoln was assassinated.
[12] “Lincoln would agree,” Baldwin’s Trump said. “He’s probably smiling up at me from Hell right now.”
Baldwin’s Trump explained that the class is very lucky to be graduating right now because there are many exciting new jobs out there like “grocery store bouncer,” “porch pirate” and “amateur nurse.”