After Nikki Haley resigns, speculation is she may run against Trump in 2020 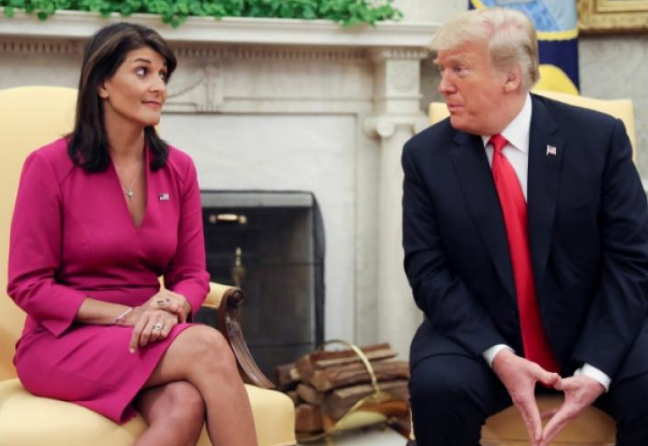 US Ambassador to the United Nations Nikki Haley exits President Donald Trump’s cabinet as the most high-profile female member, potentially putting her back into play as a candidate for a Republican Party struggling with women voters.
In her out-of-the-blue announcement on Tuesday, Haley, 46, pointedly tried to shut down talk that she would run for any office in 2020, including challenging Trump in his re-election bid.But that hardly stopped Washington from playing a new round in its favourite parlour game: Who’s running for what? President, vice president and U.S. senator were all on the table.
Those who know Haley from her days as a popular governor of South Carolina believe she is in an enviable position.
“What she’s done as UN, ambassador has not only raised her own profile, which was already high, but she also raised the profile of the job and she’s left some big shoes to fill,” said Rob Godfrey, a former political aide in South Carolina.
Haley has received high marks for her U.N. job performance. An April poll by Quinnipiac University found that 63 percent of voters approved of Haley, including 55 percent of Democrats.
Haley was vague about her reasons for quitting, citing a desire to take some time off. In her resignation letter, Haley referred to returning to the private sector.
Few people who have watched her over the years see her leaving the public arena for long.”The most likely explanation is she wants to put some daylight between herself and Trump in advance of running for president,” said Jordan Ragusa, a political science professor at the College of Charleston in South Carolina.
‘STRENGTHEN THE TICKET’
Haley, who had scant experience in diplomacy before taking the UN job, now emerges as a dream candidate, one who figured out how to work with the voluble Trump without upstaging him, but would also buck her boss on issues that mattered to her.
She applauded women who come forward with accusations of sexual misconduct by men and said they should be heard, even if they were accusing Trump. She took a tougher stance than her boss on Russia. And in the wake violent protest by white nationalists in Charlottesville, Virginia, she called on her staff to oppose hate, a position viewed as a contrast to Trump’s response.
Haley’s departure also stoked speculation she could replace Lindsey Graham as the senator from South Carolina, a possibility that Trump played down. Talk in Washington is that should Trump replace Attorney General Jeff Sessions with Graham after the Nov. 6 congressional elections, South Carolina Governor Henry McMaster would be responsible for selecting a replacement to serve until the 2020 election. McMaster was previously Haley’s No. 2 in the state.
Despite the fine line Haley walked with Trump, speculation quickly swirled in Washington that Trump could drop Vice President Mike Pence as his 2020 running mate and choose Haley instead.
“Ambassador Haley has much political life ahead of her and perhaps as vice president and beyond,” said Karen Floyd, a former Republican Party chairwoman in South Carolina.
Trump suffers from a massive gender gap in his approval – a large majority of women disapprove of his job in office and Haley could be added in an effort to win over more women voters.
“I could certainly see a myriad of ways in which she could strengthen the ticket,” said Claire Wofford, a political science professor at College of Charleston in South Carolina.
But Republican strategist Rick Tyler called the idea of Haley replacing Pence “far fetched.” Tyler said her future is wide open but doubted she would rejoin the administration.Even Russian UN Ambassador Vassily Nebenzia, with whom Haley often sparred, said she would resurface in politics.
“She’s young, she’s energetic, she’s ambitious. I think that we will see her after she has this well-deserved respite that she was referring to,” Nebenzia said.