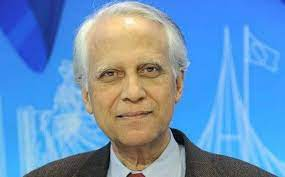 Ambassador Muhammad Zamir
After one year of Brexit analysts feel that the reality of one year of trading outside the Single Market and Customs Union has become very challenging. There has been huge drop in sales of British products and in many cases they appear to have become relatively uncompetitive in Europe.

A year after the signing of the UK-EU Trade and Cooperation Agreement – the real economic start of Brexit – has drawn attention to some interesting facets- (a) Great Britain has managed to avoid the worst case scenario of a stop to cross channel trade with its denotations of massive social and economic challenges; (b) UK exports have slightly recovered in recent months, but not fully and some sectors such as clothing and food are still struggling; (c) Total UK-EU trade (both ways) has missed out on a global rebound in trade in 2021, and remained at the very low levels of the 2020 pandemic and

(d) Trade with the Republic of Ireland has slumped from Great Britain but has increased from Northern Ireland. Economists in addition have indicated that the UK’s key export markets are now less reliant on UK goods, and that the UK is less reliant on foreign goods.
In this regard BBC has reported that from January to October

2021 there was US Dollar 627 billion in two-way trade between the US and the European Union, up from $532bn in the same months in 2020, a bounce back of 18%. Interestingly, China-EU two-way trade in the first 10 months of 2021 was also Euro 558 billion compared to Euro 479 billion in 2020, an increase of 17%. In comparison, the equivalent figure for the UK’s two way trade with the EU saw a 2% growth- Pound Sterling 308 billion as opposed to Pound Sterling 302 billion.
In other words, UK-EU trade has in this first year of the post Brexit trade deal, failed to rebound unlike most of the rest of world trade. Trade with the rest of the world – the “non-EU” countries – has also gone down both ways since 2019, though by less. UK exports to the rest of the world are down by 7% or nearly Pound Sterling 12 billion from January-to-October 2021 versus the same in 2019. UK imports in the same time period have also fallen by 3% to Pound Sterling 227 billion. This was surprising, because the new checks instigated were mainly enforced on exports going to the EU, and not on imports coming into the UK.
Some British trade specialists have blamed the lack of desired growth on frustrating red tape obligations, but there is also optimism that things will improve by the end of 2022. This has been reflected in the context of the UK car industry. The long delayed wave of investment into electric vehicles has started, beginning with Nissan recommitting to its Sunderland site. This follows not just the zero tariff deal, but also the last minute commitments negotiated by the British Prime Minister with the EU to allow the deal to apply for a few years to cars with lots of imported technology from Japan, Korea and the US.
Strategists feel that all the connotations of Brexit are not yet over. The deal struck in the weighed down circumstances of 2019-20 are in reality not immutable. For the first time since the 2016 referendum, opinion polls are now showing that a small but steady majority now regrets Brexit. Alleged misgovernance in the top ranks of the Conservative party, the patchy performance of Brexit ministers over the Covid pandemic, continuing rows with Europe over fisheries and Northern Ireland, and a failure to make good the promises of the Brexiteers- have all contributed to this shift in the public mood. There is also another significant factor of uncontrolled immigration, especially by irregulars being trafficked across the Channel from France.
One must not forget that the issue of governance was central to the negotiation of the Withdrawal Agreement and Political Declaration by dint of which the UK eventually left the EU on 31 January 2020. Equally, governance dominated the negotiation of the Trade and Cooperation Agreement (TCA) which was concluded on 24 December 2020.
As the country struggles to come to terms with the economic shock of the pandemic, the adverse long-term consequences of Brexit are beginning to surface. The economy has been shrinking while interest rates are rising. People have also noticed that rising demand is having difficulty due to falling supply of goods and labour. Important service industries, notably travel, tourism and universities, have also already emerged as strong opponents of Brexit. Farming and fisheries are no longer the only sectors to complain about broken promises.
All the above elements since the beginning of 2022 have persuaded EU analysts to suggest that the EU should re-think about a new category of affiliate membership within the framework of the EU treaties. It is felt that such affiliation should allow the EU to develop close economic and cultural partnerships with its neighbours in a democratic fashion.

Affiliate states will gain an automatic right to be consulted in the Union’s constitutional negotiations — including membership of a future Convention. It is estimated that a European Security Council involving all full and affiliate member states will inevitably have an impact on positions struck at the United Nations, in G20 and in other international treaty negotiations. Economist Andrew Duff has suggested that “such differentiated integration of the wider Europe will require the EU to build a stronger federal government at the centre.

The new structure should also be underpinned by the establishment of a European Security Council combining EU member and affiliate states with NATO”.It needs to be also understood that the Brexit diagram was complex and has since the past year grown more multifaceted. In this context it also needs to be noted that the Northern Ireland Brexit has not been a clean break with the EU legal order but a differentiated disintegration which treats different parts of the UK separately.
(Muhammad Zamir, a former Ambassador, is an analyst specialized in foreign affairs, right to information and good governance, can be reached at <[email protected]>)