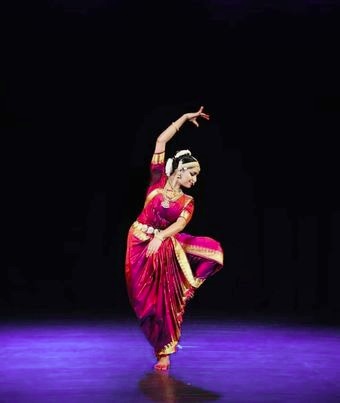 DOT Desk: Bharatnatyam is one of the oldest and the most famous dance forms of India. It is regarded as the mother of other classical dances. Today, it is an art form that has stood the test of time while evolving and changing with the changing social, political and social scenarios. Shankari Mridha is a prominant bharatnattyam dancer of present time. Being a firm believer in maintaining the integrity of tradition, Sankari Mridha is not only a bharatanatyam performer, but also a teacher and choreographer. Sankari had been worked a 3 year period from 2013 to 2016 in Bangladeah, as a teacher of bharatnattyam. Then she has played a major role in spreading Indian culture throughout Bangladesh with her performances. She performed many districts in Bangladesh, all described her performances as graceful and elegant.
Furthermore, she was an exceptional dance teacher, she taught from her private studio in Dhaka and at Indira Gandhi Cultural Centre. She is an excellent teacher which is reflected by her students as she continues to take online classes and workshops for her students in Bangladesh. She said, Bangla is my mother tongue and I feel Bangladesh is adjacent to my home country. She also said, Bangladeshi people are most hospitable and friendly. Shankari also said, dancing for me is like brathing. It is my happiness, my joy, my sorrow and my peace. I have chosen to live my life only with dance.
She feels as if her students are like family and keenly wants to continue teaching forever with them.
One of her students, arani bhakta who had started dancing under her supervision got a scholarship for three years in India. She completed her masters in Bharatanatyam from Gujarat university of Baroda and she is now planning to pursue a PHD in dance too. Shankari receives several prizes in dance. She achieved Indira Gandhi Cultural Centre Award – 2013, 2014, 2015 and 2016 for best Bharatanatyam Direction in Dhaka, Bangladesh. Also received an British Council ISA award from JM International School on October in 2011. She obtained 1st Position at “Tansen Sangeet Mahavidyalaya, New Delhi” in 2010.
Sankari has truly been an inspiration for all who want to pursue dance as a career in the future.
Shankari completed senior diploma in Bharatanatyam and Kathak from India. To broaden her horizons as an artist and for satiating her quest for seeking knowledge in the field of dance currently she is doing Diploma in Dance Education (DDE)from UK. Sankari has done a great job to spread her art in Bangladesh and now she is living in the UK for the last six years spreading her culture there as she did in Bangladesh.