[1] 26 dead as speed boat overturns after hitting bulkhead anchored in Padma [2] Family of each victim to receive Tk 20,000 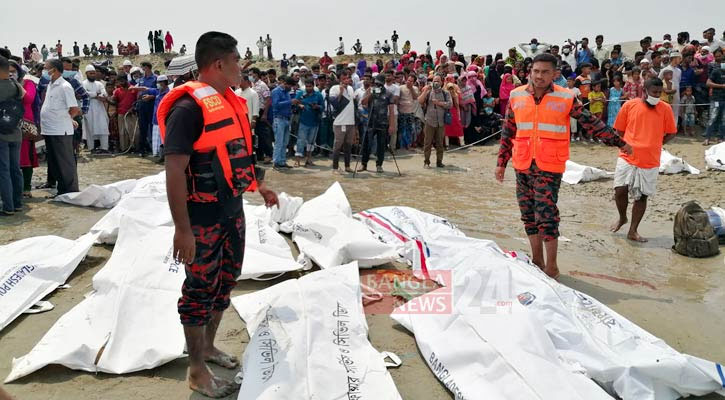 Hossen Sohel for DOT
[3] At least 26 people were killed as a speedboat overturned after hitting a sand-laden bulkhead anchored in Padma in Madaripur’s Shibchar upazila yesterday, report The Business Standard, The Daily Star.
[4] One of the deceased was identified as Taher Ali (35), a resident of Rajor upazila in Madaripur. Five people were rescued alive. They were taken to Shibchar Upazila Health Complex. [5] The accident occurred near old terminal at Kathalbari, one kilometre off Banglabazar Ferry Ghat area, around 7:00am
[6] In total, 26 bodies were recovered from the Padma river so far, said Ashiqur Rahman, inspector of Banglabazar Ferry Ghat Traffic Police. All the deceased — one female and 25 males — were passengers of the speedboat.

[7] District and naval police, divers of Fire Service and Civil Defence, ferry ghat authorities along with locals are conducting the rescue operation.

On the way, it hit the bulkhead and overturned in the river.

[9] The speedboat was carrying passengers, violating the restriction imposed by the government amid the pandemic situation, said Madaripur Deputy Commissioner Rahima Khatun.

[10] The accident occurred as there was not sufficient light in the morning and also the driver was not skilled enough, the DC said.

Owner of the speedboat, Chandu Mia, does not have registration while its driver Md Shah Alam has no license, ghat authorities said.

The committee, which also includes representatives of magistrates, naval police and fire service, has been asked to submit a probe report within three working days.

Family of each victim will receive Tk 20,000 assistance for the funeral, the DC said.