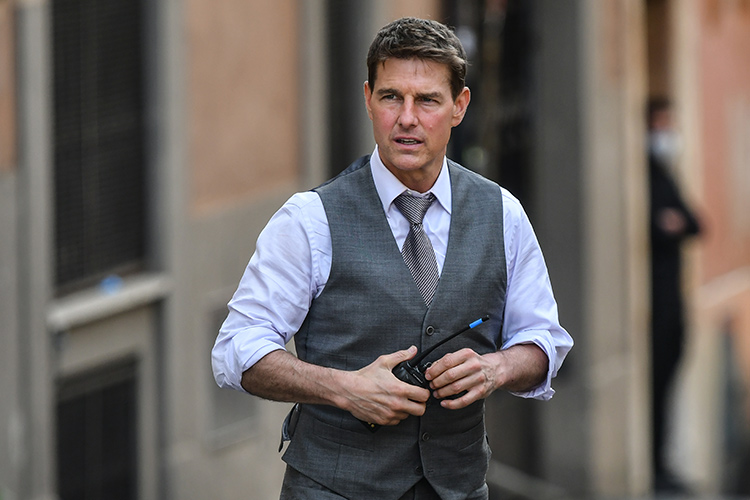 AFP:[2] Tom Cruise managed to stay in action mode as he jumped to help a cameraman during filming for a tricky Mission: Impossible stunt.
[3] Shooting is under way for the seventh film in the franchise, with scenes currently being filmed in the North Yorkshire Moors.[4] Last week, the Mail Online published photos showing Cruise grabbing hold of a cameraman who had slipped from the carriage of a moving train. While the cameraman was wearing a harness to prevent him from serious injury, Cruise apparently managed to help prevent him from slipping further down the side of the carriage or from dropping his equipment.[5] Cruise is famous for going above and beyond to ensure that Mission: Impossible 7 goes ahead despite difficulties that have occurred during the pandemic.[6] In December, a leaked audio recording showed him yelling at two crew members who apparently broke safety protocols by standing too close to one another on set. Tom cruise 1 Tom Cruise is seen on the set of “Mission Impossible 7” while filming in Rome. AFP While the rant divided fans and critics, Cruise received support from fellow Hollywood stars such as George Clooney.
, who said he understood that Cruise wanted to prevent the film’s team from losing their jobs.

“People have to understand that and have to be responsible. It’s just not my style to, you know, to take everybody to task that way,” he said.

He added that, while he wouldn’t have done it “quite that personally”, he wondered whether the situation had happened before.

“I don’t know all the circumstances so maybe he had it 10 or 15 times before,” he said.

Mission: Impossible 7 has suffered a number of setbacks due to the coronavirus pandemic. Production was initially halted in February 2020, while filming was taking place in Italy.

In October last year, the film was forced to shut down for another week after a crew member tested positive for Covid-19. Production has since taken place in various locations, including London.

The film is scheduled for release in May 2022.