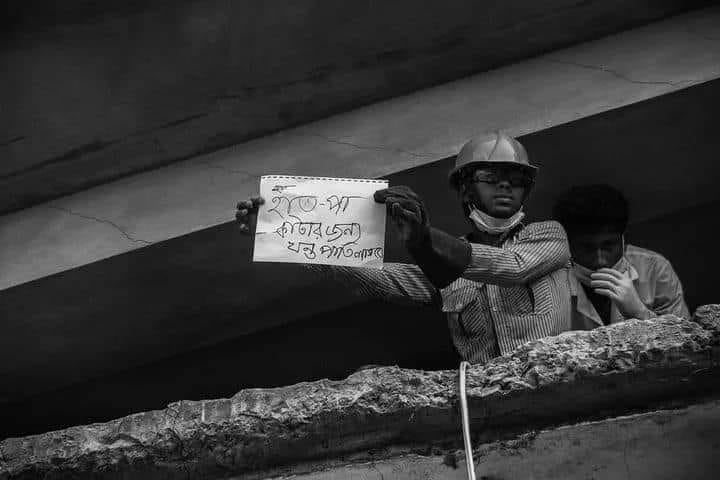 That’s what is written on the paper. The young man holding it was named Himu, someone I knew personally. this is one of the iconic images of the Rana Plaza factory collapse on 24 April 2013. The staggering number of victims (more than 1100 dead) resulted not just from the collapse, but also due to the failure of rescue effort by the government. Those who died may have been making clothes for people all around the world (for some of the best clothing brands), but when the factory collapsed, their abandonment by the government and the world order was clear. That they are expendable bare lives in a necropolitical order of things, was evident.
Himu was one of those brave volunteers who joined the rescue effort. He had to amputate many arms and legs to save lives. This experience changed him forever. He was a shell of his former self after this. Several volunteer rescuers committed suicide later. Himu was the last of them. He burned himself to death on 24 April 2019, at the 6th anniversary of the Rana Plaza tragedy.
There was no movie like Hacksaw Ridge in his memory, nor was any medal of honor. But We did not forget, nor will we forgive.
© Photography by Parvez Ahmad Rony