[1] India’s richest people are fleeing on private jets as the country hits almost 350,000 COVID-19 infections in another daily global record 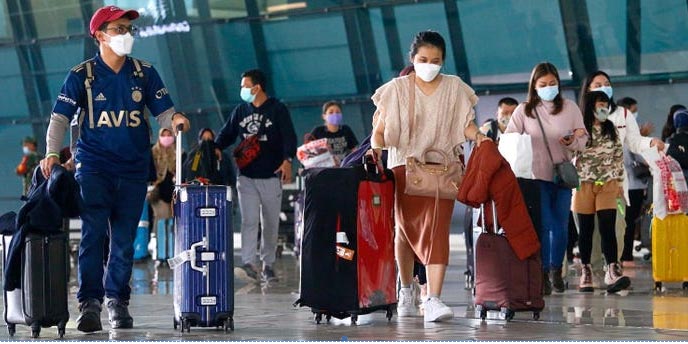 India’s ultra-rich are paying tens and thousands of dollars to escape the country as it set a new global record for daily coronavirus infections — for the fourth day in a row.
In the last week, India has become the new epicenter of the virus, which has completely overwhelmed the country’s healthcare system and crematoriums and has led to a dire shortage of oxygen.
On Sunday, public health officials reported 349,691 new COVID-19 cases in the country, according to Sky News. They also reported 2,767 deaths, another daily record, as some nations announced they would implement travel restrictions on visitors from India.
Read more: Booking Holdings CEO says he sees ‘significant upsides’ to using vaccine passports as the travel industry gets ready to make its big comeback
The alarming numbers are prompting wealthy Indians to pay thousands for last-minute flights and private jets as travel restrictions come into place.
One popular destination seems to be the United Arab Emirates, which is only a short distance away from India and usually operates hundreds of flights there. It announced this week that it was barring the entry of travelers from India for 10 days from April 25, according to Gulf News.
A spokesman for charter company Air Charter Service India told AFP that the amount of interest in private jets has been “absolutely crazy.”
“We have 12 flights going to Dubai tomorrow and each flight is completely full,” the spokesman said Friday, according to The Economic Times.
Another private jet provider, Enthral Aviation, said it has been overwhelmed by hundreds of inquiries over the last few days.
“We have requested more aircraft from abroad to meet the demand … It costs $38,000 to hire a 13-seater jet from Mumbai to Dubai and $31,000 to hire a six-seater aircraft,” an Enthral Aviation spokesperson said, according to The Economic Times.
“People are making groups and arranging to share our jets just to get a seat… We’ve had some queries for Thailand but mostly the demand is for Dubai,” they added. According to the Sunday Times, at least eight private jets were flown to Britain from India in the last 24 hours as the UK implemented its own travel ban on the country. It is reported that the jets may have cost more than $138,000 (£100,000) to charter for the nine-hour flight.
A COVID-19 patient gets admitted to a government hospital in Kolkata, India, on April 22, 2021. Indranil Aditya/NurPhoto via Getty Images
India has been facing an unexpected and devastating second coronavirus wave. A shocking video from the BBC, published Thursday, showed people dying on stretchers while waiting for help outside a hospital.
In New Delhi, which has been hit particularly hard, one person is said to be dying of COVID-19 every four minutes.
The US government said on Saturday that it was seriously concerned about the worsening situation in the country and that it was in high-level talks to deploy extra help to Indian healthcare workers.
“Our hearts go out to the Indian people in the midst of the horrific COVID-19 outbreak,” US Secretary of State Antony Blinken said on Twitter. “We are working closely with our partners in the Indian government, and we will rapidly deploy additional support to the people of India and India’s health care heroes.”