The Boogaloo movement has a new strategy 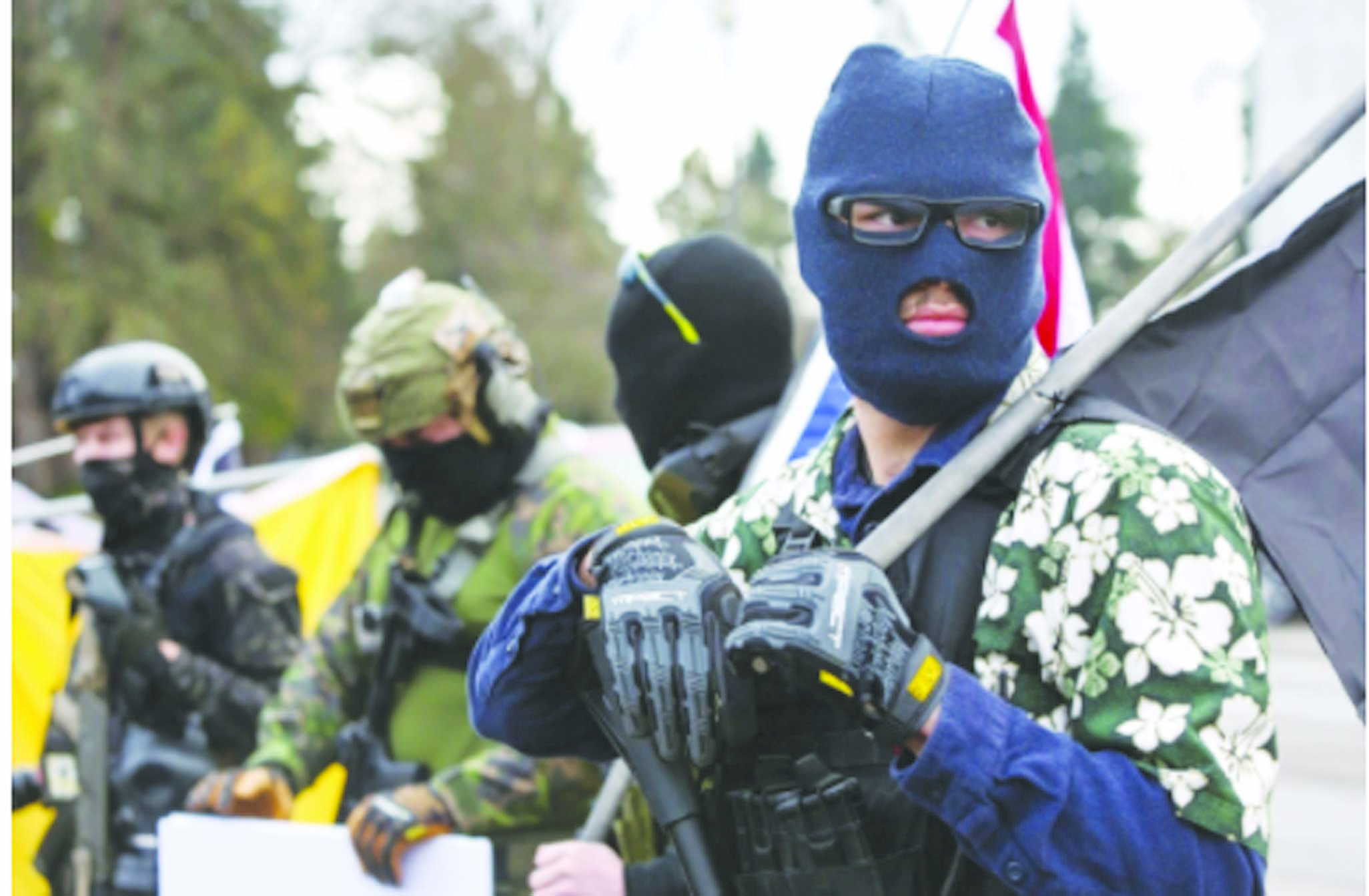 Members of the anti-government Boogaloo movement are adopting a new strategy to achieve the end of the US government, members tell Al Jazeera.
Adherents are calling for cooperation with left-wing organisations – previously considered adversaries by some in the Boogaloo – to foster a mass withdrawal from the political and economic systems overseen by the United States government. Based on the political philosophy “agorism”, it aims to bleed the government of tax funds through a “Counter-Economy”, compliance with laws and mandates given by voters. The desired result: the collapse of the US government through “death by a thousand cuts”. The move marks a divide between the Boogaloo’s base that eschews government and white nationalist members who tried to stoke violence during last summer’s Black Lives Matter protests to start a new civil war. Magnus Panvidya, a vocal Boogaloo member working to unite left- and right-wing anti-government groups, told Al Jazeera the “idea of Agora … that practice is very ubiquitous almost anyone you speak to” in the Boogaloo. Panvidya identifies only as “anarchist”, but said his “actions and goals pull very heavily from agorism”.
Broadly, members of the group, called Boogaloo Bois, have “no issue with violating the law to accomplish what they’re doing”, he said, referring to the exchange of goods on grey markets without government oversight, which are “popping up” throughout Boogaloo networks to sell “equipment”. Tax evasion is encouraged, too.
Rise in use
The Boogaloo movement made its mark over the summer of 2020, when men clad in Hawaiian shirts bearing AR-15-style guns began showing up at Black Lives Matter protests after the May 25 death of George Floyd. The group attracted white nationalists that hoped the tumult of a nationwide protest movement could be harnessed to start a “Boogaloo” – a term for a second US Civil War born of online meme culture – that would devolve into a race war.
According to watchdog groups and Al Jazeera’s review of online forums and chat groups, those elements remain. But Panvidya says they were purged from the Boogaloo movement. The Boogaloo movement is half “Libertarian with a big ‘L’”, referencing the political party that advocates for limited government and “then the rest of us are just a wide spread of different forms of anarchism”, Panvidya sad. The Boogaloo movement is decentralised, making it difficult to gauge agorism’s popularity in the movement. According to data tracked by the Social Media Analysis Toolkit (SMAT), a tool designed to track conversations and key terms across social media and messaging platforms, “agora” saw similar spikes across Telegram and Reddit since the Black Lives Matter protests began. Services used by the Boogaloo including social media platform MeWe, which is anti-censorship, and Keybase, an encrypted messaging service, are not tracked by SMAT.
Some significant points have been highlighted from the article. To read the full article please visit: https://www.aljazeera.com/news/2021/4/16/holdagorism-what-is-the-ideologyoftheboogaloobois?fbclid=IwAR0U3LJ7qF5im4c6ATurETVfw_yix7T3xyc3FRcj7IANU6MEfefaiyEOfCw

autonomous zone, an area taken over by anti-racist protesters in Seattle during nationwide protests against police brutality. “Building spaces that are autonomous from government influences is definitely growing within the movement and was the impetus of working with Anti-Fascist organisations,” Panvidya said.
Right and Left
Panvidya wants cooperation. He invites left-wing activists to discuss issues via social media and has appeared on left-wing populist Jimmy Dore’s YouTube channel to discuss their similarities in beliefs, such as anti-racism and LGBT support. However, the ideological valley between left- and right-wing anarchists is deep. Both want a stateless society, but their methods of achieving it are opposed. Anarcho-capitalists follow what many in the US would view as extreme libertarianism. They want all production and services privatised, with labour and markets intact. Most left-wing anarchists view the end of wage labour and private ownership of certain goods as integral. They largely do not want “Counter-Economic” markets to be part of their route to end the state. But Derrick Broze, an agorist who is working on a biography of Samuel Edward Konkin III, the man who created the ideology in the 1970s, told Al Jazeera that agorism was “born out of” a “desire to tap into both left and right”. Broze explained that some left-wing anarchists allow for markets, and Konkin believed Counter-Economics would serve Feminist and Black Liberation movements. Still, the ideology appeals more to “American Libertarians”, he said. While Broze does not view himself as an anarcho-capitalist, many agorists do. Konkin’s ties to Murray Rothbard, a prominent libertarian, are also a concern for leftists and anti-racists. Rothbard coined the term “anarcho-capitalism” and was founder of the Ludwig Von Mises Institute, which the Southern Poverty Law Center describes.
as “neo-Confederate”.

Konkin also served on the board of the Institute for Historical Review, known for Holocaust revisionism.

Broze said Konkin did not share those views and said it was an “unfair association”. Al Jazeera’s review of Konkin’s available writings did not find examples of racism or anti-Semitism, though it was not exhaustive.

According to a person working with the Anarchist media platform It’s Going Down (IGD), who asked for anonymity, these and other ideological divides, including support for far-right figures like Kyle Rittenhouse, the teen who shot anti-racist protesters in Wisconsin, make cooperation difficult between left-wing anarchists and the Boogaloo.