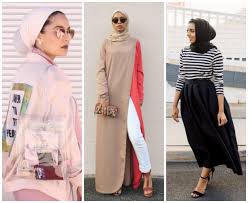 Eiahia Nakib of DOT
Indonesian female designer Dayasing Lestari wants to deliver Halal clothes to the world in accordance with Islamic customs, including the Hijab. Her latest fashion designs are catching up widely at home and abroad, reports Deutsche welle.
Eight years ago, she founded an online shop called Hijab, where clothes were sold for Muslim women and men.
The Indonesian 200 designer making the products available on the e shopping website Hijab, marketing, sales – all controlled from the company’s headquarters in Jakarta. Lestari has 121 colleagues

When she launched the initiative, despite being the most populous country in the world, foreign companies occupied the Indonesian market. She started to work as an opportunity.

Lestari has been wearing a hijab since the age of 14. Her mother did not want that. Now, she sells the same fashion and runs the business well. In the past, aged women wore hijabs. Now its popularity is increasing among the younger generation.

Lestari is one of the few women in Indonesia’s small start-up sector. She is the mother of two children. Some investors were doubt about whether such a young mother could run a business. She often works from home to deal with both sides.

Lestari wants to lead in another way According to her, “It is my responsibility to grow and sustain this company. Maybe being a woman doesn’t make me feel ‘boss’. It seems we are a team. There seems to be nothing I can do without the team. To them I put myself as part of the team. “