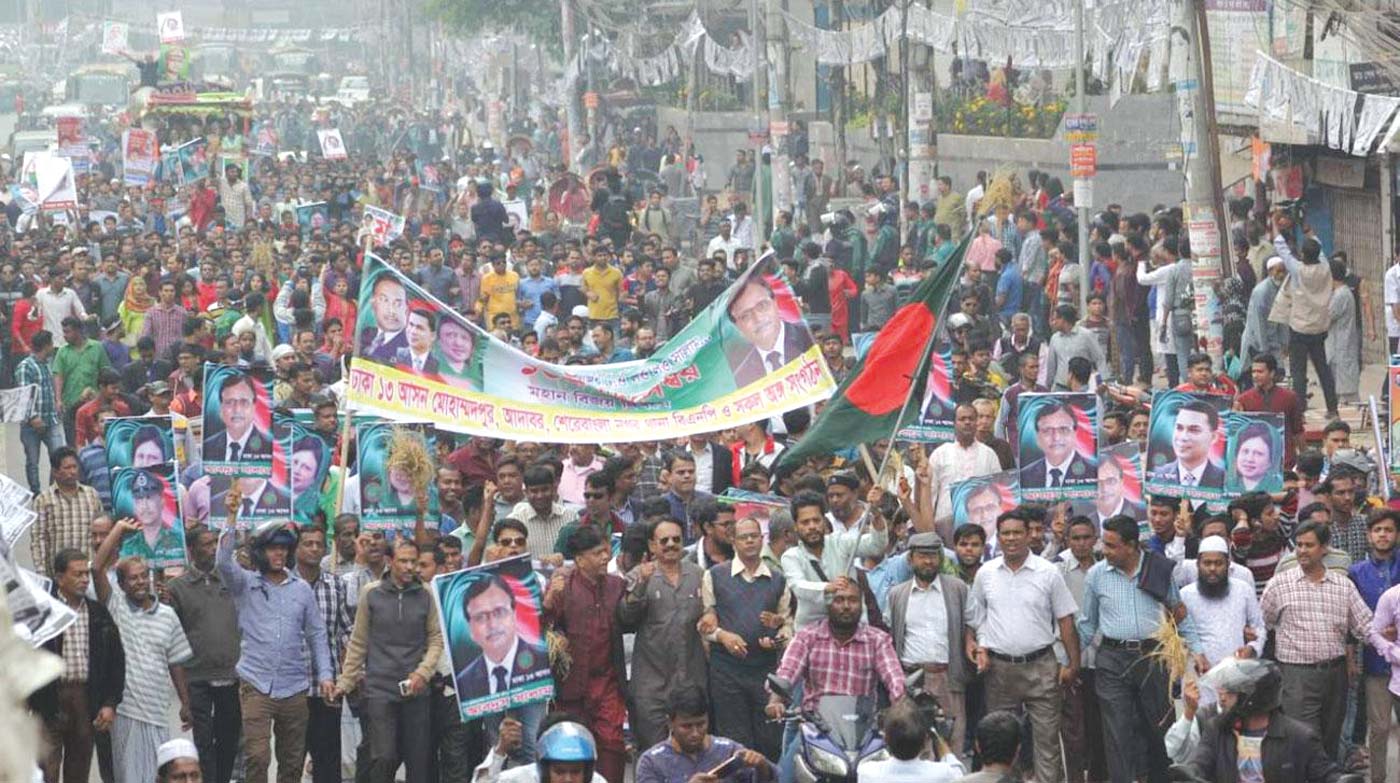 Sayeed Muhammad of DOT
Jatiya Oikyafront yesterday took out a colourful procession in Dhaka city, marking the 48th Victory Day.
Thousands of leaders and activists of the alliance thronged BNP’s Nayapaltan central office and its adjacent areas in small processions since yesterday morning, reports UNB.
They joined the colourful procession carrying the national flag, placards, banners and portraits of party top leaders. The procession moved towards Shantinagr from Nayapaltan amid tight security.
Although the rally was scheduled to begin at 2:00pm, it started around 11:45am following a request from the police.
The rally turned into an ‘election campaign’ as the supporters of different Oikyafront candidates took part in it carrying their posters, banners, portraits and the election symbol ‘Paddy Sheaf’.
They also chanted slogans in favour of their respective candidates.
BNP secretary general Mirza Fakhrul Islam Alamgir inaugurated the rally in front of the party’s central office.
After parading different roads through Bijoynagar, Kakrail and Shantinagar, the rally concluded peacefully at Nayapaltan around 12:10pm.
Ganoforum executive president Subrata Chowdhury, Nagorik Oikya convener Mahmudur Rahman Manna, BNP Vice Chairman AZM Zahid and chairperson’s adviser Abdus Salam, among others, spoke at the rally.
In a brief speech before starting the rally, Fakhrul said the country’s people are worried about the future of democracy as the government is ‘shamelessly repressing’ the opposition candidates and their supporters across the country.
“The upcoming national election is very important for people as it’ll determine whether democracy and freedom of speech will remain in the country or not. It’ll also determine whether our chairperson Khaleda Zia will be freed or not,” he said.
Fakhrul said the Election Commission has failed to discharge its duty neutrally to hold a credible election.
“We never witnessed such a national election. They (govt) are unprecedentedly arresting the opposition candidates and its leaders and activists and implicating them in false cases. They’re also trying to keep our candidates away from the election race,” he alleged.
Referring to Saturday’s attack on BNP’s Dhaka-8 seat candidate and Noakhali-1 aspirant Mahbubuddin Khokon Mirza Abbas and , he said the EC is silent even after such an incident.