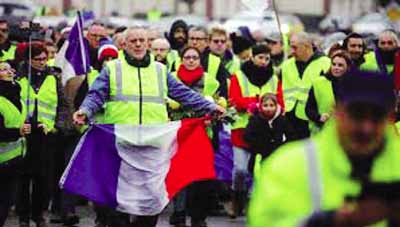 Arafat Hasan of DOT
The Bank of France has lowered the country’s economic growth forecast for the current and next fiscal year, from 1.6% to 1.5%, warning that the longer the unrest lasts the greater the losses will be for the national economy.
Shortly after slashing its assessment of economic growth, in the final quarter, in half, the central bank has cut overall growth on Thursday. Nevertheless, the regulator remains optimistic about unemployment, which they predict will continue to fall.
While the new figures show that the economy is expected to slow just 0.1% in 2018 and 2019 compared to previous assessment, in real money the sum is quite significant. It may cost the protest-ridden EU nation up to $28 billion based on the IMF forecast for the country’s GDP for 2018 of almost $2.8 trillion.
However, the chief official of the French central bank added that the forecasts do not include French President Emmanuel Macron’s recent concessions made in attempt to quell raging protests. Macron’s measures, including the promises to increase minimum wage and introduce special tax exemptions, will cost the country between 8-10 billion Euros ($9-$11.3 billion), the junior minister for public accounts announced earlier this week.