Yemen talks go down to the wire 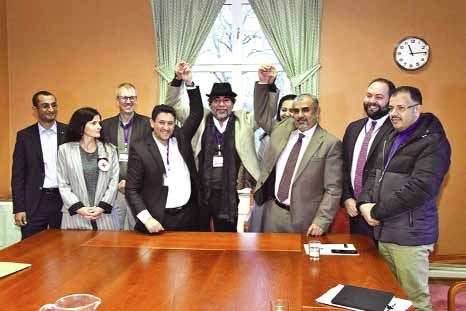 Arafat Hasan of DOT
Both sides in the Yemen conflict agreed on Wednesday to reopen Sanaa airport and resume oil and gas exports. However, the agreement on the Red Sea port of Hodeidah and a cooperation deal on the crumbling economy remained elusive as the clock ticked down to the last day of talks. Another round of talks has been tentatively scheduled for January.
A UN spokeswoman said both sides had received a “final package” of agreements on the status of Hodeidah, a political framework and shoring up the economy.
The two parties agreed that international flights would stop at a government-held airport for inspections before flying in or out of Sanaa. They have yet to agree on whether those inspections will be in Aden airport or Sayun.
Yemen’s Prime Minister Maeen Abdulmalik Saeed said there may not be enough time for full agreement on Hodeidah before the talks, the first in over two years.
UN envoy Martin Griffiths is trying to avert a full-scale assault on Hodeidah by Yemen government forces backed by the Saudi-led coalition, and is asking both sides to withdraw from the city. His proposal is for an interim entity to run the city and port and for the deployment of international monitors.
Both sides have agreed to a UN role in the port, but differ on who should run the city. The Iran-backed Houthi miitias want Hodeidah declared a neutral zone, but Yemen’s government argues it is a matter of sovereignty.
-Source: Arab News