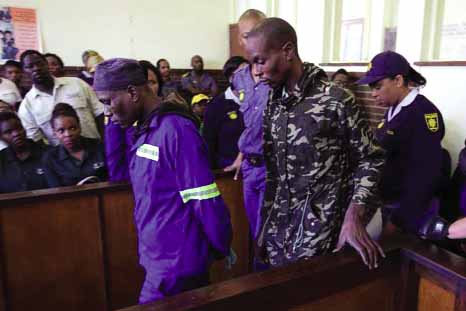 The Guardian, UK
Two South African men accused of cannibalism were given life sentences for murder on Wednesday, with the judge saying they were guilty of “the most heinous crime”.
Judge Peter Olsen sentenced Nino Mbatha, 33, and Lungisani Magubane, 32, to life in prison for the killing last year of Zanele Hlatshwayo, the Witness newspaper said.
Mbatha, a traditional healer, was arrested after handing himself in at a police station in Estcourt, a town in KwaZulu-Natal province. He was carrying a bag containing a human leg and a hand. He told officers he was “tired of eating human flesh”.
Police refused to believe his claims until he took them to a house where more body parts were found.
A third man was acquitted. Seven people were initially arrested.
The judge acquitted Mbatha for being in possession of body parts because he said it was a duplication of the murder charge. The court found that Hlatshwayo, 24, was killed for her body parts, local media reported..
At earlier hearings in Estcourt, angry residents had gathered outside the court to protest against the grisly murder.
South Africa has no direct law against cannibalism, but mutilating a corpse and being in possession of human tissue are criminal offences.