‘2 new air bases to be set up in Barisal, Sylhet’ 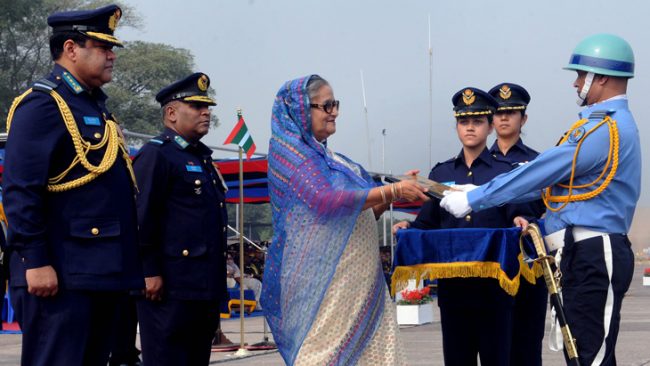 Prime Minister Sheikh Hasina has said the process of setting up two new air bases of Bangladesh Air Force (BAF) in Barisal and Sylhet is underway, aiming at updating its strength and capability.“I believe with this (construction of the new air bases) the BAF will become bolstered further and its capability will be increase,” she hoped, reports UNB.The premier made the announcement while addressing the Winter President Parade of Flight Cadet Course (FCC) of the BAF at its Jessore academy yesterday.PM Hasina instructed the BAF personnel to always remain alert to act in any necessity of the country and the nation alongside protecting the country’s independence and sovereignty.She suggested the newly commissioned officers to perform their responsibilities with honesty, concentration and sincerity.“You are the son of this soil, never think yourself isolated from the masses, always try to bring smile to their faces,” she said.