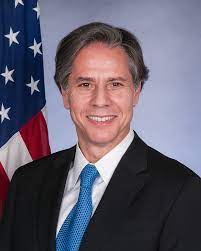 [3] Lapid, a centrist who delayed his own plans to be prime minister as he masterminded a coalition to unseat veteran leader Benjamin Netanyahu, is flying to Rome to see Blinken, who arrives in Italy on Sunday on a three-nation tour of Europe.

[4] The meeting comes as President Joe Biden’s administration moves ahead with fresh talks on reviving a 2015 accord with Iran — strongly opposed by Israel — in which Tehran drastically scaled back nuclear work in return for promises of sanctions relief.

Biden and Blinken are also eager to preserve a fragile ceasefire that took effect on May 21 between Israel and the Palestinian Islamist movement Hamas, which controls the Gaza Strip, after the worst fighting since 2014.

The bloodshed triggered some of the strongest criticism of Israel in memory in the US Congress, with some members of Biden’s Democratic Party accusing Netanyahu of excessive force and of triggering the crisis by backing far-right Jewish groups that want to change the delicate status quo in the holy city of Jerusalem.

Lapid, who took office on June 13 under Prime Minister Naftali Bennett, a nationalist, has accused Netanyahu of jeopardizing Israel’s once rock-solid support in the United States by openly rallying behind former president Donald Trump’s Republican Party.

The new coalition government still sees Iran as the major threat to Israel, and has launched its own strikes on the Gaza Strip — but has pledged to put the alliance with Washington first and to try to keep differences private.

After one of Lapid’s telephone conversations with Blinken, the Israeli foreign ministry said that the two agreed on no surprises in the relationship.

Netanyahu quickly pounced, posting a video in English on social media calling the new government “so dangerous” and speaking of how he as premier would sometimes not inform the United States of pending Israeli actions.