[1]US immigration: Thousands gather under bridge at US-Mexico border in growing crisis 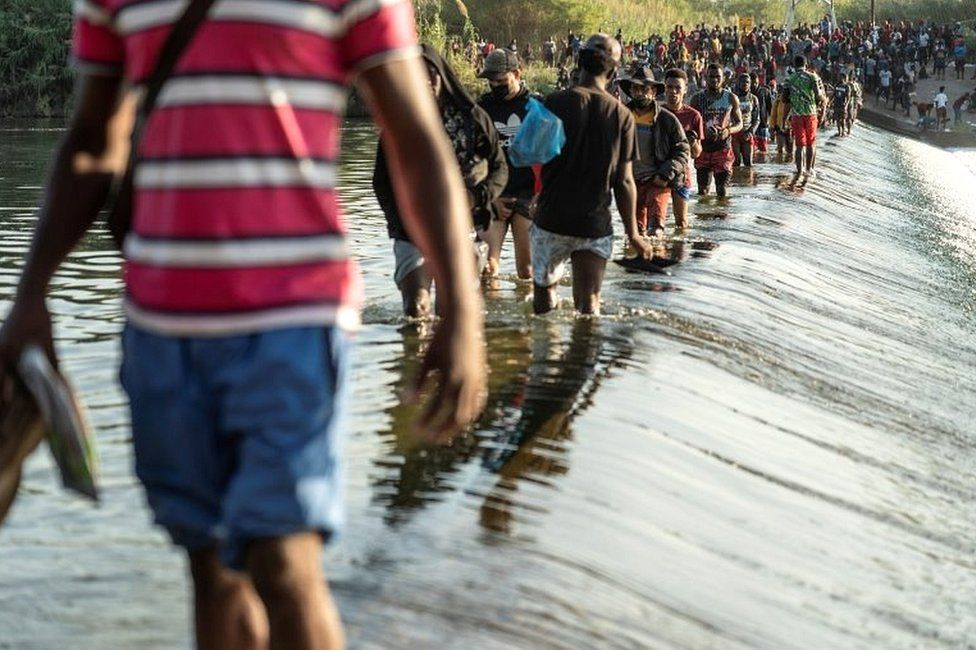 BBC:[2]Some 10,000 migrants have gathered under a US-Mexico border bridge over recent days, leading to a growing humanitarian crisis.The bridge connects Del Rio in Texas to Mexico’s Ciudad Acuña and the temporary camp there has grown with staggering speed in recent days.

[3]The mostly Haitian migrants, who have crossed the Rio Grande, are sleeping under the bridge in squalid conditions.The US government has been facing a surge of migrants at the border.Earlier this year, it was reported that the number of migrants detained at the US-Mexico border in July exceeded 200,000 for the first time in 21 years, government data shows.

[4]And last month, the authorities arrested more than 195,000 migrants at the Mexican border, according to government data released on Wednesday.he makeshift camp has few basic services, and migrants waiting in temperatures of 37C (99F) are said to be going back to Mexico to get supplies.

They are said to be mostly Haitians, with some Cubans, Venezuelans and Nicaraguans also present, reports say.

They appear to be part of a larger wave of Haitians heading north, many of whom arrived in Brazil and other South American nations after the 2010 earthquake, the Washington Post reports.

According to Del Rio Mayor Bruno Lozano, more than 10,500 migrants were under the Del Rio International Bridge as of Thursday evening, Reuters news agency reports.

Ramses Colon, a 41-year-old Afro-Cuban asylum seeker who worked in Peru to save money for the trip, said the Del Rio camp was “chaos”.

“You stand there among thousands with your little ticket waiting for your turn,” he told the Washington Post. Migrants have been given tickets with numbers while they wait to be processed.