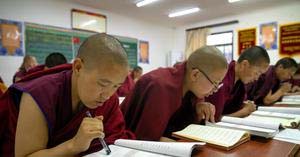 Hindustantimes: [2] The US state department on Thursday expressed concern over reports of China’s actions against Tibetan Buddhists, including the destruction of Buddha statues as a part of its campaign to obliterate the traditions of the ethnic minority.

[3] The state department’s Office of International Religious Freedom, which promotes universal respect for freedom of religion or belief for all as a core objective of US foreign policy, urged the Chinese authorities to respect the right of Tibetans to practice their belief freely.

We urge PRC authorities to respect the right of Tibetans to practice their beliefs freely,” the US Office of International Religious Freedom wrote on Twitter.