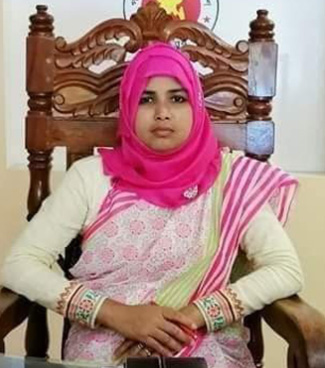 Shahnaz Begum of DOT
[2] A woman died at Barisal Sher-e-Bangla Medical College Hospital after contracting corona. Relatives did not even touch her for fear of Corona. Neighbors did not come near. Finally, Khaleda Khatun Rekha, Upazila Nirbahi Officer came forward to take a bath before burying the dead woman. She bathed the dead woman in Corona with the help of two other volunteers to ensure health protection, reports dainikamadershomoy.com .

[3] The incident took place at Ujialkhan village of Kaukhali in Pirojpur around 10pm on Friday. UNO Khaleda is praising the locals on the issue. Social media users have praised UNO’s bold initiative, reports amadershomoy.com.

[4] The UNO Rekha has never had the experience of bathing a dead person before. However, when her relatives and neighbors were afraid to come to the dead woman in Corona, she got the news and ran away.

[5] They wear protective equipment (gowns, hand gloves, masks, caps and boots) before bathing. The woman was later buried at the family graveyard in Ujialkhan village.