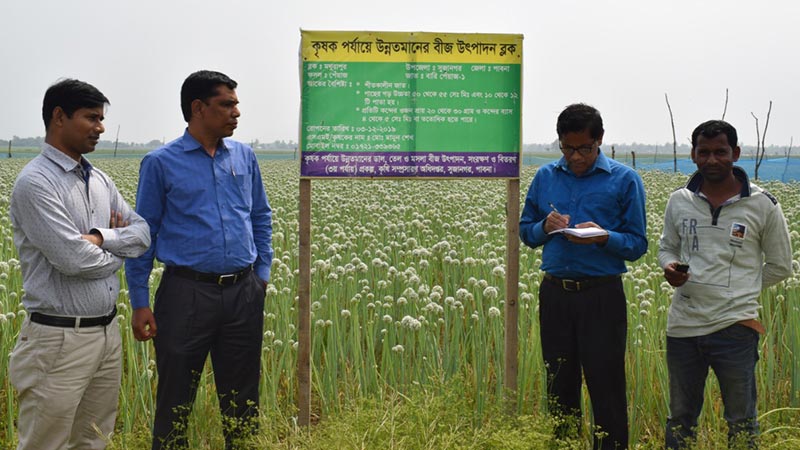 Labiba Nayeem Khan of DOT
[2] The cultivation of pulses, oil and spice crops in the country was very low. As a result, Bangladesh became import dependent. The government used to spend a lot of money on importing these crops. Various projects are being implemented through the agriculture department to reduce this cost. The cultivation of these crops is gradually increasing. Imports also declined with that. Saving is the cost of foreign exchange. Even one or two oil crops are being exported to meet the demand of the country. Sesame is one of them. The Green Revolution was started in 1964 with the aim of filling the food shortage in the country. Although it was not so convenient then, the farmers of this country continue to see the light of hope.

[3] In its continuation, post-independence cultivation of Biri paddy started.

Biri paddy cultivation started in Bangladesh with the help of Philippine technology. Although the variety is Biri, it is known to the farmers as Eri. Most of the farmers expressed reluctance in this cultivation. The field level officers and employees of the Department of Agriculture worked tirelessly to introduce the cultivation of Eri paddy in the lands of one or two farmers. It is learned that due to this success of the Department of Agriculture, the government has taken up various crop projects with domestic and foreign assistance.

[4] Through these projects, the agriculturists of our country go abroad for training. Later he came to the country and started to develop high yielding varieties of different crops including paddy with trained technology. As a result, Bangladesh has been able to achieve self-sufficiency in food today. But Bangladesh, which is lagging behind in nutrition, needs to increase the cultivation of nutritious crops. That is why the government adopted a plan to increase the cultivation of nutritious pulses, oils and spices after the country became self-sufficient in food. [5] To reduce import dependence, pulses, oil and spice production, storage and distribution projects were undertaken at the farmer level. The project, adopted in 2016, focuses on the production, storage and distribution of quality seeds. Although the project is valid till 2022, the farmers of the country have started getting the benefits. The use of seeds produced through the project has increased the cultivation of pulses, oils and spices as well as increased yields. As a result, the country’s traditional mustard oil is still available at 150 taka per kg.

[6] The produced sesame is being exported to China and Japan even though it meets the demand of the country. There is more demand for this medicinal crop in those countries. Farmers of the country get quality seeds of spices like onion, garlic etc. at the doorsteps and increase the cultivation. As a result, the prices of these spices are within the purchasing power at the consumer level, as per boniknarta.net.