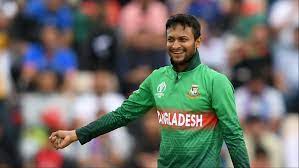 ICC: [2] Shakib Al Hasan has climbed back to the top of the MRF Tyres ICC Men’s T20I all-rounder rankings for the first time since early 2018.
[3] Shakib earned 34 rating points over the course of the final four T20Is against Australia to move to 286 points – one more than Afghanistan’s Mohammad Nabi.

[4] The rise to the top of the rankings continues what has been a fruitful period for the Bangladeshi all-rounder, who earned an ICC Men’s Player of the Month nomination for July and became just the second man to take 100 T20I wickets during the fifth match against Australia.
[5] The 34-year-old was the Player of the Series in Bangladesh’s 4-1 win over Australia, finishing with the third-most wickets (seven at 18.14) and second-most runs (114 at 22.80) in either side. Shakib was not the only major winner from Bangladesh on the latest rankings update, with Mustafizur Rahman climbing 20 spots to move to 10th on the T20I bowling rankings with 619 rating points.
The wily seamer improved his rating by an even 100 across the final four T20Is against Australia, finishing with a campaign haul of seven wickets at 8.57, leaking just 3.52 runs per over.