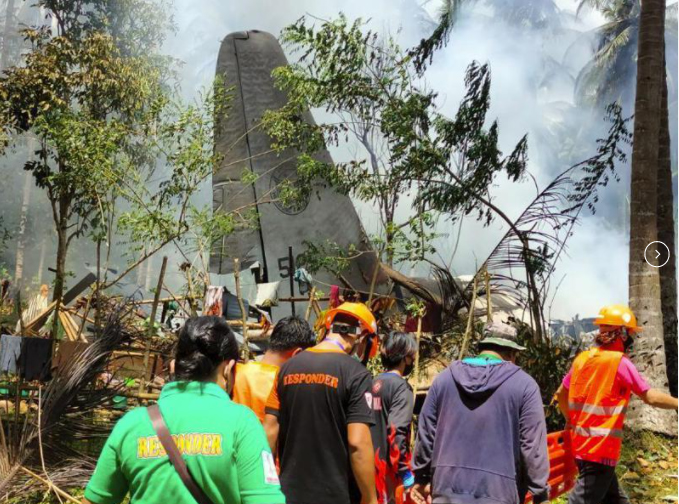 AP:[2] A Philippine air force C-130 aircraft carrying combat troops crashed in a southern province while landing Sunday, killing at least 29 army soldiers on board and two civilians on the ground, while at least 50 were rescued from the burning wreckage, officials said.

[3] Some soldiers were seen jumping off the aircraft before it crashed and exploded around noon in the periphery of the Jolo airport in Sulu province, military officials said. Two of six villagers who were hit on the ground have died.

[4] Defense Secretary Delfin Lorenzana said rescue and recovery efforts were ongoing. The aircraft had 96 people on board, including three pilots and five crew and the rest were army personnel, the military said, adding 17 soldiers remained unaccounted for by nightfall.
The pilots survived but were seriously injured, officials said.

The Lockheed C-130 Hercules was one of two ex-U.S. Air Force aircraft handed over to the Philippines as part of military assistance this year. It crashed while landing shortly before noon Sunday in Bangkal village in the mountainous town of Patikul, military chief of staff Gen. Cirilito Sobejana said.

Military officials said at least 50 people on board were brought to a hospital in Sulu or flown to nearby Zamboanga city and troops were trying to search for the rest. “Per eyewitnesses, a number of soldiers were seen jumping out of the aircraft before it hit the ground, sparing them from the explosion caused by the crash,” a military statement said.

Initial pictures released by the military showed the tail section of the cargo plane relatively intact. The other parts of the plane were burned or scattered in pieces in a clearing surrounded by coconut trees. Soldiers and other rescuers with stretchers were seen dashing to and from the smoke-shrouded crash site.

The plane was transporting troops, many of them new soldiers who had just undergone basic training, from the southern Cagayan de Oro city for deployment in Sulu, officials said.