[1]More than 61,000 diarrhoea patients admitted to ICDDR,B in 2 months 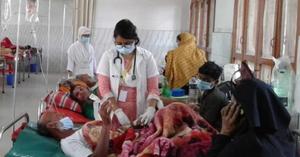 Shahnaz Begum of DOT
[2] This information was given by Tariful Islam Khan, Senior Manager, Public Relations Branch of International Centre for Diarrhoeal Disease Research, Bangladesh (icddr,b) in Mohakhali. He said that although the number of diarrhoea cases has decreased, patients are still being admitted to the Hospital, reports Amadershomoy.com.

[3] Tariful said that despite the Eid holidays, health workers are working tirelessly to tackle the diarrhoea outbreak. Although the number of patients in the hospital has decreased, the diarrhoea situation is still not normal.[4] He said around 300 to 400 diarrhoea patients visit the clinic every day for treatment.

However, an average of 500 patients were admitted every day in the first week of March this year, rising to 600 in the second week.