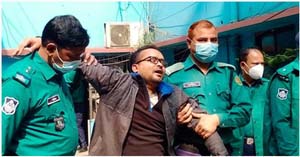 Shahnaz Begum of DOT
[2] A fraudster has swindled lakhs of taka by pretending to be an official of the Prime Minister’s Office, APS of the Home Minister, senior officers of the army and police. Police have arrested a man named Chandra Shekhar Mistry on the charge, reports amadesomoy.com.[3] Mohammadpur police arrested Chandra Shekhar from the Nazneenbagh area of Tejgaon on Wednesday on the basis of the allegations.[4] Tejgaon Division Deputy Commissioner (DC) Biplob Kumar Sarkar told reporters at his office in Shyamoli yesterday afternoon that the arrested Chandra Shekhar used to snatch large sums of money from people by promising jobs in various government and non-government organizations under false pretenses.