[1]Karnataka govt set to crack down on illegal Bangladeshi immigrants 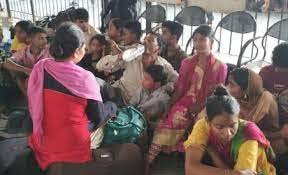 Deccanchronicle: [2] The Karnataka government plans to crack down on Bangladeshi immigrants who work in the State, with Home Minister Araga Jnanendra flagging concerns that they pose a danger to the country’s internal security.[3]The Minister said a survey is underway by police to track down such illegal immigrants.He said police have information about their presence in parts of the State, especially in coffee plantations in Kodagu and Chikkamagaluru districts working as labourers.”Special efforts and preparations are on to track them and apprehend them,” Jnanendra told PTI in an interview on Thursday.[4] aHe alleged that Bangladeshi immigrants manage to get ration cards, voter ID cards and Aadhaar cards in Assam and West Bengal after they sneak into India.It’s a big racket and there is a need to crack down on this network.

“It poses a danger to our country’s security”, the Minister said.Jnanendra also said cyber crime cases have been going up sharply in recent times in the State, adding, police are in touch with bank managements to address the issue.

The Karnataka government has inked an MoU with its Gujarat counterpart on training state personnel to tackle cyber crimes.

“We are sending 60 police personnel working in our cyber cell to Gujarat for training”, the Minister said.

On drug menace, Jnanendra said Karnataka police is in touch Central agencies, and coordination with neighbouring States to curb such activities is being strengthened.