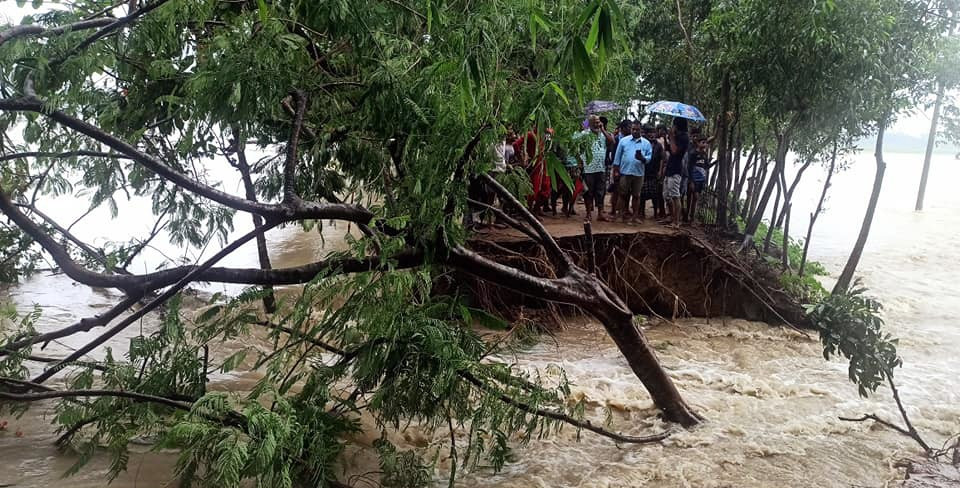 DOT Desk: [2] The flood situation has further deteriorated in Sylhet, with the continuous rainfall for the last five days, reports Dhaka Tribune.

[3] The low-lying areas, particularly in Zakigonj upazila were inundated with the upstream downpour from India and flash floods in other upazilas of the district. The upazila’s main rivers, Surma and the Kushiara were flowing above their danger marks as of Sunday night.

The water level in the main rivers of the Meghna basin in the north-eastern part of the country has risen alarmingly in the last couple of days. According to the Sylhet Meteorological Department, the continuous rain in the district is an effect of Cyclone Asani. A portion of the Bay of Bengal with moderate pressure from the west exacerbated the flood situation, as it is also the monsoon season in Bangladesh.

[4] Saeed Ahmad Chowdhury, senior meteorologist of the department, said: “There is a possibility that heavy to moderate rainfall will continue in Sylhet till Wednesday.”

The official also predicted that the rain will lead the rivers to flow above their danger levels, and aggravate the flood situation further in the district.

Thousands of people in Zakigonj, Gowainghat, Jaintapur, and Companiganj upazilas have been affected due to the flash flood. On the other hand, residents of Jaintapur upazila’s 50 villages are now at risk of a flood in the coming days.

Meanwhile, road communication between Sylhet and Gowainghat upazila has been snapped due to waterlogging.

Previously, various areas of Sylhet Sadar, Companiganj, Gowainghat, Jaintapur and Kanaighat upazilas were inundated due to hill slopes and rains.

Sylhet District Administration had allocated 79 tons of rice for the flood-affected people in those five upazilas.

The upazila nirbahi officers were also directed to take necessary steps to help the marooned residents.