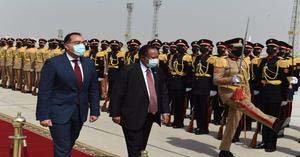 Monitor: [2] Egypt called on the parties to the political conflict in Sudan to take part in choosing a new, consensual transitional prime minister in preparation for the formation of a new Cabinet as soon as possible.[3] Egypt announced its support for a United Nations initiative for a dialogue between the political actors in Sudan, in a bid to reach a deal that ends the current political crisis. The initiative has been widely welcomed at the international level, including by the United States and the United Kingdom.

[4] Sudan is struggling through its fragile transitional phase to a civilian democratic government, following the popular protests in April 2019 that overthrew a decadeslong dictatorship.[5] Egypt said that the dialogue between the political parties would solve the current crisis and prevent the country from slipping into chaos, according to a Jan. 8 statement by the Foreign Ministry.

On Jan. 13, Al-Araby Al-Jadeed newspaper quoted an unnamed Egyptian source as saying that Cairo has begun to intensify its contacts with the parties to the crisis in Sudan, in an effort to play a mediating role to reach an agreement that guarantees the continuation of the transitional phase and the selection of a consensual prime minister until the completion of the democratic transition process in the country.

Sudan has been going through a state of political instability and insecurity since the military coup in October 2021, through which the army seized power, ending a power-sharing arrangement with civilian partners in governance and which was aimed at paving the way for democratic elections.

Special Representative of the Secretary-General and head of UNITAMS Volker Perthes said that the initiative will be limited to holding indirect and individual preliminary consultations among the Sudanese stakeholders, in the hope for moving to a second stage of direct or indirect negotiations. He told reporters Jan. 10 that the army did not express any objection to the initiative.