[1]Daulatdia ferry ghat No. 7 breaks down, another ghat under threat 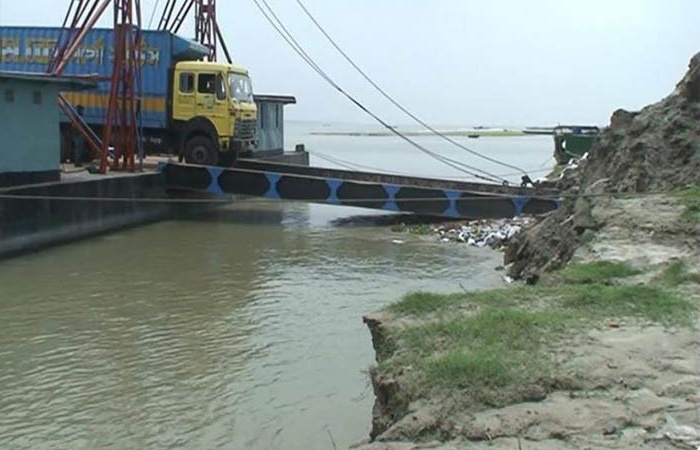 [3] On October 4, 2019, the number one ferry ghat of Daulatdia sank in the river. A few days later, Ghat No. 2 also broke into the Padma. As a result, out of the six ghats, ghats number three, four and five remain operational throughout the year. Ferry Ghat No. 7 was rebuilt last year due to the ghat crisis. [4] Daulatdia Ghat branch assistant Feroz Sheikh said that BIWTA takes care of the ghats. We only see the ferry service. However, BIWTA authorities have already been asked to take steps to prevent the erosion, reports Daily Inqilab.

[5] Aleya Begum, a resident of Ferry Ghat No. 7 said the river had been eroding for several days. The land was in the river many years ago. Local Hafiz Mollah said the chairman-members did not make any inquiries. As it is breaking now, there will not be a ferry terminal this monsoon.

[6] BIWTC Daulatdia Ghat Branch Assistant General Manager Feroz Sheikh said that BIWTA works to maintain the ghat. The matter has been reported to the higher authorities.

[7] Nizam Uddin, executive engineer of BIWTA Aricha region said, “we have already visited the erosion area along with the chairman of BIWTA.” Work has started to prevent erosion in Ferry Ghat No. 7 area.