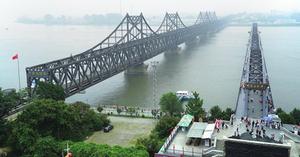 Koreajoongangdaily: [2] Trade between China and North Korea in January and February increased forty-fold compared to the same period last year, according to Chinese customs, pointing to the partial restoration of overland commerce after the North reopened rail links early this year.

[3] Data released by the Chinese General Administration of Customs showed trade between North Korea and China increased 40.7 times from $3.27 million in January and February last year to $136.5 million for the same time frame this year.

[4] Chinese exports to North Korea accounted for approximately $116.3 million of trade in the first two months of the year, while North Korea exported $19.96 million worth of goods in the same period.

According to the Chinese customs bureau, Chinese exports to the North were mostly comprised of essential foodstuffs, such as soybean oil and flour, and other necessities such as construction materials, pharmaceuticals and agricultural-purpose chemicals.

According to Radio Free Asia, soybean oil purchases by the North were worth $7.73 million, while pharmaceuticals comprised $10.5 million.