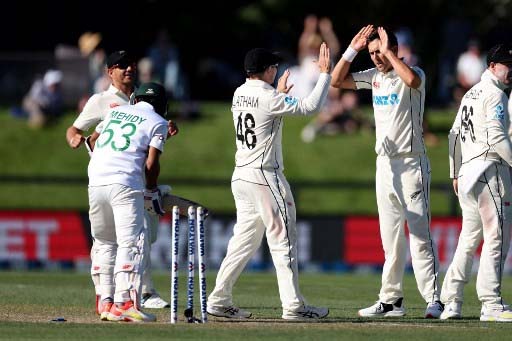 AFP: [2] Trent Boult bagged five wickets as Bangladesh were rolled for 126 at stumps in reply to New Zealand’s mammoth 521 for six declared in the second Test on Monday.The last wicket fell in the last over of the day in Christchurch as the Bangladesh innings ended inside a session and a half, and 395 in arrears.

[3] The hosts must win the Test to square the two-match series after losing the first Test by eight wickets. They had made batting look easy after being sent in on a green wicket with opener Tom Latham in the middle for more than nine hours for his 252, while Devon Conway added 109 and Tom Blundell was 57 not out.

[4] When the Black Caps declared, pace bowlers Boult and Tim Southee then showed how to move the ball on a verdant surface as they ripped through the Bangladesh line-up.

Boult ended with five for 43 while Southee took three for 28.