[1]Biden announces U.S. military mission in Afghanistan will end August 31 [2] US achieved its goals, Afghans must decide own future 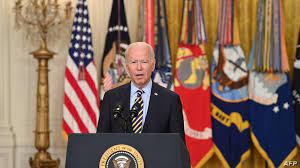 Fox news:[3] President Biden said U.S. troops will be out of Afghanistan sooner than his original Sept. 11 deadline, telling reporters Thursday U.S. forces will be home by Aug. 31.

[4] “In this context, speed is safety,” Biden told reporters, adding that not a single U.S. military member has been lost during the withdrawal process. “The United States did what we went to do in Afghanistan – to get the terrorists who attacked us on 9/11 and to deliver justice to Usama bin Laden,” he continued. “We did not go to Afghanistan to nation-build.”

[5] President Joe Biden gave a significant policy speech on Afghanistan on Thursday, saying that the US had achieved its objectives in the country and that now was the right time to leave. [6] He justified his decision to withdraw US military forces from Afghanistan, stating that rather than sacrificing another generation of Americans in an unwinnable conflict, the Afghan people must decide their own future. House press secretary Jen Psaki’s claim Thursday that the U.S. will not have a “mission accomplished moment.”
“It’s a 20-year war that has not been won militarily,” she told reporters.

But Biden struck down this argument and said that in preventing future attacks from Al Qaeda and killing Usama bin Laden, the U.S. had “accomplished” its goal.
The president further pushed back on some GOP calls to remain in Afghanistan as the Taliban gains in strength.

Biden said it is the “right and responsibility” of the Afghan people to decide how their country will function, and the impetus of the government to protect the nation’s sovereignty.

The U.S. will continue to provide air support for Afghani military forces, along with humanitarian and civilian assistance on important issues surrounding women’s rights.