[1]Batters put Bangladesh in the driving seat at end of day 3, take first innings lead to 73 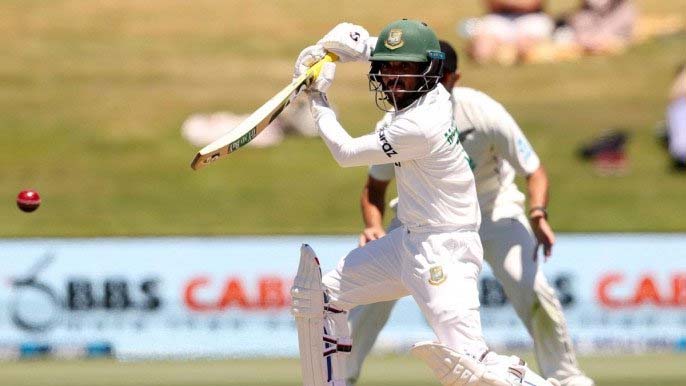 DOT Desk: [2] Three days of the Mount Maunganui Test between Bangladesh and New Zealand have been played so far and Bangladesh are well ahead of the hosts based on the number of sessions won. Bangladesh made the hosts bowl 156 overs and at stumps on day three, they were just four overs away from the third new ball.

[3] That’s quite a rare sight for the Black Caps and that’s how well Bangladesh have fought so far in the Test match. Bangladesh were 401 for six after 156 overs at the end of day three, ahead of the hosts by 73 runs. [4] Liton Das and Mominul Haque put on stellar batting displays after the early departure of Mahmudul Hasan Joy but both of them would be kicking themselves for missing out on hundreds narrowly.

New Zealand bowlers were far more disciplined on day three morning than they were on day two. Neil Wagner, who was by far the best bowler on day two, tested the batters with his typical short-pitch bowling especially Mahmudul Hasan Joy on the third morning. Joy became slightly impatient, unlike the previous day. He played a couple of uppish drives off the front foot on the off-side but ended up hitting the ball straight to the deep gully in an attempt to guide the ball past the vacant point region. This was Wagner’s third scalp. Joy played well for his dogged 78.