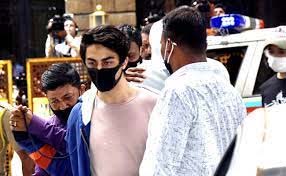 NDTV: [2]Opposing bail for Shah Rukh Khan’s son Aryan Khan in the drugs-on-cruise case, the Narcotics Control Bureau (NCB) has alleged in a statement to the Bombay High Court that the superstar’s manager Pooja Dadlani “appeared to have influenced” a witness.In its written reply to the High Court submitted yesterday, the NCB also said it believed that given Aryan Khan’s “influential position”, he could try to tamper with the investigation and derail it.

[3]The anti-drugs agency said it needed more time to follow what it called the “international drug connection of Aryan Khan” revealed in the investigation. “The same is being investigated and as per stipulated guidelines, sufficient time is required to properly unearth this international drug connection,” said the NCB.”Further, considering the influential position Aryan Khan holds in the society, he may tamper with the evidence and influence other witnesses whom he personally knows is very much possible,” the agency told the High Court.

The details of the written statement emerged just before the High Court hearing on the bail request of Aryan Khan, who has been in jail since October 8 over drugs-related charges. The star son is among 20 people arrested after NCB officers raided a party on a cruise ship on October 2.

The NCB referred to the sensational allegations of a witness, Prabhakar Sail, who has claimed in an affidavit that Kiran Gosavi, the private investigator whose selfie with Aryan Khan went viral and threw up questions, had planned to demand ₹ 25 crore from Shah Rukh Khan’s manager Pooja Dadlani to settle the case. Of this, he claims, ₹ 8 crore was meant for Sameer Wankhede, the NCB officer leading the investigation.