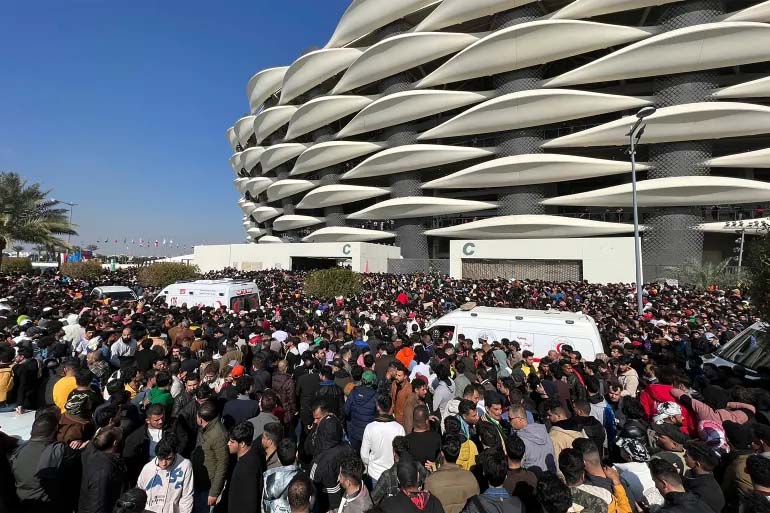 It was meant to be the icing on the cake. The crowning of Iraq as champions of the Arabian Gulf was supposed to bring to a conclusion a tournament that had welcomed Iraq back into the international scene.Celebrations, however, were overshadowed by the reported deaths of at least four from a stampede which also injured dozens of others ahead of the tournament’s final on January 19. Poor crowd control, awful security protocols and mismanagement resulted in the fatal chaos.Instead of the focus being placed on sport, the failure of the security forces and resulting tragedy at the final became a metaphor for the gross ineptitude of the Iraqi government and burst the bubble of the two-week high that had been the Arabian Gulf Cup.
With hours to go before kick-off it was clear Iraqi government officials were not in control of the tens of thousands of fans who had descended on Basra’s ‘Palm Trunk’ stadium. Government officials quickly began discussing the possibilities of postponing the final of the tournament or even having it transferred to another neutral country as news of causalities began to spread. Yet the government should have anticipated such crowds and been much better prepared. It was known the match was sold out and it was expected that those without tickets would attempt to crash the match.
Just two weeks earlier, after having attended the opening ceremony in Basra myself, I had written about how badly organised the crowd control was. It was a disaster waiting to happen as tens of thousands were shepherded through bottlenecked gates.
The failures of the government to prepare for the chaos is akin to the patchwork solutions they have implemented to combat years of malignant corruption and collapsing public services.Even the infrastructure for the football facilities highlighted how jerry-built the rest of the preparation was. Iraq did invest in constructing a stunning 65,000-seater stadium in Basra, but what about the surrounding infrastructure? Dirt tracks lead up to the stadium. A lack of public transport facilities means that cars must rush towards the stadium down single-lane roads, alongside pedestrians. And on January 19, an inadequate number of turnstiles and riot police contributed to the deaths of excited spectators. The government must be held to account.But as is usually the case with Iraq, the government – in a press release by the prime minister – chose to brush over the failures and instead praise the security forces. “We are also saddened by the unfortunate incidents that took place” is all Prime Minister Mohammed Al-Sudani said, opting to not address the deaths directly. Instead, his statement — which thanked teams and fans for participating in the tournament — had a self-congratulatory feel to it and referred to the prime minister’s “feelings of hope and pride”.
Iraqi fans of course used the occasion to remind the government of their grievances, as the final was due to kick off, by unfurling a banner of Omar Sadoun, a young protestor who was killed by the country’s security forces during a wave of anti-governmental protests in 2021. In all, around 600 Iraqis had died in the crackdown on those protests.
Promises after promises of change by a string of governments have failed to result in any meaningful action against corruption. In November for instance, reports emerged of how governmental officials had plundered $2.5bn of public funds. Yet that heist accounts for a mere one percent of the total amount lost to corruption since 2003.This is all money which could have been used to bolster Iraq’s failing public services, including crowd control in Basra.
In Basra, for example, more than 100,000 people were hospitalised in 2018 because of a lack of access to clean water. Last summer Basra also suffered from consecutive days without any electricity, despite soaring temperatures, once again sending people to hospital as a result of heatstroke and severe dehydration. This even impacted football matches leading up to the Arabian Gulf Cup as electricity cuts switched off the floodlights during matches.
The corruption can be found in each corner of Iraq’s government, including the health sector. After decades of underfunding, hospitals struggle to care for patients in dire need of treatment. Drugs destined for public consumption often get sold to private businesses with officials pocketing the profits.
Even the sports sector has been impacted by corruption and incompetence. The Basra International Stadium was first opened in 2013. That surrounding roads, turnstiles and access into the stadium have still not been developed a decade later is directly related to the preventable deaths at last week’s final.
What was meant to be a joyous occasion has sadly been shadowed by the unnecessary loss of life.Iraqis should be proud of the success of their team at the Arabian Gulf Cup. Their government, though, has no reason to feel proud of itself. The stampede in Basra should serve as a reminder to the government that fighting corruption and supporting public services must now become a priority for Iraq to truly progress.