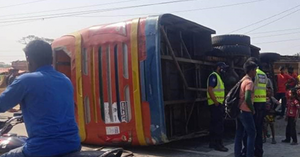 UNB: [2] With the rapid increase in the number of vehicles, mostly cars, in the congested roads of Bangladesh cities, there has been a steady rise in the number of accidents too.As many as 543 people, including 81 children, were killed and 612 others injured in 427 road accidents in April, Road Safety Foundation (RSF) said in its latest report, released on Saturday.

[3] The non-government organisation said 206 lives were lost in 189 motorcycle accidents, which is 37.93 per cent ototal deaths. Also, 116 pedestrians and 87 drivers and their assistants were killed in March accidents.On the other hand, accidents on waterways claimed at least eight lives while 23 were killed and five injured in train accidents across Bangladesh last month.[4] Road Safety Foundation presented the findings based on the reports of seven national dailies, five online news portals and electronic media.