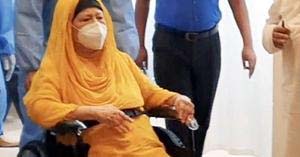 Shahnaz Begum of DOT
[2] In a joint statement, Journalists yesterday said that Begum Khaleda Zia is currently undergoing treatment at the CCU of Evercare Hospital in the capital in critical condition. Doctors say she is now in a life-and-death situation, reports Daily Inqilab.

[3] In order to save Khaleda Zia, she needs to be taken to an advanced center abroad for treatment. Therefore, we urge the government to rise above politics and consider the humanitarian aspect and give her the opportunity to seek medical treatment abroad immediately, said in the statement, reports Daily Naya Diganta.

She is very ill with various diseases.[5] Khaleda’s physician and the party leaders said , the health condition of BNP Chairperson Khaleda Zia is still critical and her body is not responding to treatments as per expectations, reports The Daily Star.

[6] Khaleda’s physician AZM Zahid Hossain last night said, “Doctors are trying their best, but her body is not responding at an expected level. We are trying our best.” Mentioning that the former prime minister should go abroad for better treatment, he said, “Her physical condition can deteriorate any time.”