[1] Virginity testing, hymen repair surgery to be banned in UK 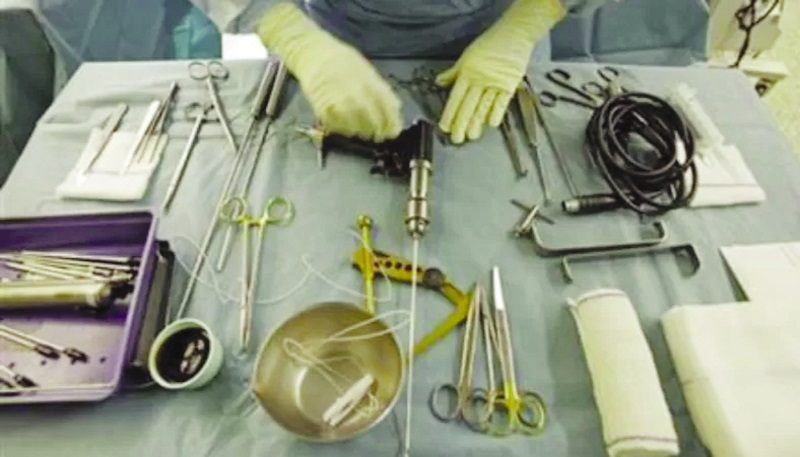 BBC: [2] Hymenoplasty is an attempt to recreate a woman’s hymen, which in some cultures is linked to virginity, and has been described as a form of honour-based abuse. It will be criminalised, as will virginity testing . Hymenoplasty is available in clinics and can cost up to £3,000.

[3] The procedure recreates a thin membrane known as the hymen which partially covers the entrance to the vagina. It is often done as a way to “repair” a hymen. The practise of hymenoplasty is linked to conservative cultures which place a high value on virginity, with the expectation a virgin should bleed after sex on her wedding night.

[4] Minister for Care and Mental Health Gillian Keegan said the government was “committed to safeguarding vulnerable women and girls in this country”. Aleena, whose name we have changed, said she was raped and then, as a teenager, faced years of pressure from her family to get the procedure.
[5] “It wasn’t something I felt like I had a choice over,” she said. “It was always put on me as if this was the only option and this is something you can do to fit back in.
[6] “I felt very, very alone. I felt guilty if I didn’t do it, I felt it was a very big weight on my shoulders. I didn’t feel like I had a choice.” Aleena said she refused to have the surgery but the pressure continued. In order to escape the situation she married someone who did not care that her hymen was not intact.
[7] She said she is proud she had the courage to not go through with the procedure. “I knew that I made the right choice and I knew everything that my parents were saying was only for pressure and their honour,” she said.
[8] The government promised at the end of last year to “introduce legislation to ban hymenoplasty at the earliest opportunity”. It has now included amendments in the health and care bill which would criminalise “aiding or abetting” a person carrying out hymenoplasty and could result in up to five years in prison.

It would also be a criminal offence to take a girl or woman overseas to have the procedure.
[9] Last year when the bill was in the House of Commons, the government amended it to ban virginity testing after calling the practice “indefensible”. Campaigners say virginity testing and hymenoplasty are closely linked. Diana Nammi, executive director at Iranian & Kurdish Women’s Rights Organisation, has campaigned for a ban and said: “Every woman and girl who face.
this invasive surgery, it is under duress – direct or indirect – to present as a ‘virgin’ and in many cases, it is carried out to enable a forced marriage, organised by her family.

“Hymenoplasty causes trauma and in around half of the cases, it fails to make the women or girl bleed the next time she has intercourse, leaving her highly vulnerable to ‘honour-based abuse or even ‘honour’ killing.”

Halaleh Taheri is the founder of the Middle Eastern Women and Society Organisation charity. She said it will take time and education to stop the practice from happening and has been working with parents.

One of the women she has worked with is Golaleh Simili, who is Kurdish. Growing up in Iran she was brought up to believe in the purity of virginity and had to present a virginity certificate before her own wedding. She said she felt “humiliated”.

She moved to the UK in 2017 but when she found out her daughter was not a virgin, she says she was very nervous and worried and they discussed the surgery. But after working with MEWso, she said she realised she should not impose the same injustice on her daughter.

Indira Varma works for a helpline run by charity Karma Nirvana. She said it can take months for woman and girls who call the helpline to admit to having hymen repair surgery. She says the procedure is often described as is being “cut”, “fixed’ or “sewn up”.

While the majority of procedures are thought to be done in clinics, there is anecdotal evidence of some getting the procedure done at home.

She said: “Victims described community elders coming into the home or doctors would make home visits to patients and they would charge an obscene amount of money for it. This is usually to avoid having to take the victim out to minimalize [the risk of] the victim asking for help or running away.”

She said it was “an underground but thriving industry” but one that “deepened the cycle of abuse for victims”.

But Dr Dheeraj Bhar, a cosmetic surgeon who runs a private clinic in Harley Street London, disagrees with the ban. He says he has never done a virginity test and does not agree with them, but does perform hymenoplasty. On average, he says it can cost between £3,000-£4,000 and takes up to 45 minutes.

By banning the procedure he worries women and girls could be put at further risk, instead he says it should be regulated.

He said: “When you ban something like a medical procedure you drive patients underground. They will start to go to back-alley doctors, or fly in doctors who fly from other countries to perform these procedures.

“I think the bigger issue here is if you don’t know these procedures are being done you can’t then monitor the complications and follow-ups.”

Many of the women who come to him are pressured by family or society but are not being forced into it, he said.

He says he has refused patients where he has felt they were being pressured by family members.

Keegan said the government would continue to work with local communities and organisations “to tackle the taboos and damaging preconceptions associated with virginity and a women’s worth”.