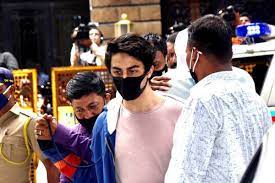 NDTV: [2] A witness in the drugs case against megastar Shah Rukh Khan’s son, has made shocking claims about collusion and pay-offs against the Narcotics Control Bureau’s senior officer Sameer Wankhede and KP Gosavi — the alleged private investigator whose selfie with Aryan Khan went viral. Mr Wankhede has denied any wrongdoing, saying he would give “a fitting reply”.

[3] In an affidavit, Prabhakar Sail — who said he is a personal bodyguard of KP Gosavi — claimed he was present in a car and heard KP Gosavi speak to one Sam D’Souza of an 18 crore deal, of which 8 crore was to be paid to Sameer Wankhede. Minutes later, KP Gosavi, Sam D’Souza and Shah Rukh Khan’s manager Pooja Dadlani, had a 15-minute meeting inside a car. He also said he had received the cash from KP Gosavi and handed it over to Sam D’Souza.
[4] Mr Sail — who is the first of the nine witnesses the agency named in a press release on October 6 — said KP Gosavi has gone missing and he feared for his life, which was why he filed the affidavit. A lookout notice has been issued against KP Gosavi.