[1] Taliban’s relationship with global community to be defined by actions, not a favour: Blinken 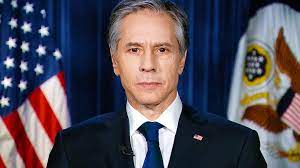 The Wire: [2] The Taliban’s relationship with the international community is going to be defined by the actions the group takes, US Secretary of State Antony Blinken said, asserting that this is not a favour to the world but a basic requirement for a stable and secure Afghanistan.

[3] The Taliban swept across Afghanistan last month, seizing control of almost all key towns and cities in the backdrop of withdrawal of the US forces that began on May 1. On August 15, the capital city of Kabul fell to the insurgents.

[4] The hardline Islamist insurgents claimed victory over opposition forces in the last holdout province of Panjshir on September 6, completing their takeover of Afghanistan three weeks after capturing Kabul.

And it’s, again, not just us. It’s the Security Council and its countries around the world,” Blinken said at a press conference on Thursday.

He was responding to a question on whether countries like China, Pakistan and all five permanent members of the UN Security Council are on board over Taliban legitimacy’s hinging on the progress made by them on their commitments.

“I think there is a very strong unity of approach and unity of purpose. And, of course, it’s not just me saying it; it’s reflected in the UN Security Council resolution that was passed just a couple of weeks ago on August 30th,” Blinken said.

UN Security Council resolution 2593 on Afghanistan, adopted under India’s Presidency of the 15-nation Council in August, had demanded that Afghan territory not be used to threaten or attack any country or to shelter or train terrorists, or to plan or to finance terrorist acts. It reiterated the importance of combating terrorism in Afghanistan, including those individuals and entities designated pursuant to resolution 1267 (1999), and noted the Taliban’s relevant commitments.

The powerful Security Council had adopted the resolution sponsored by France, UK and the US with 13 members voting in favour, none against. Permanent, veto-wielding members Russia and China abstained, highlighting the lack of unity in the Council over the Afghan situation.

The resolution had noted the Taliban statement of August 27 in which the outfit had committed that Afghans will be able to travel abroad, may leave Afghanistan anytime they want to, and may exit Afghanistan via any border crossing, both air and ground, including at the reopened and secured Kabul airport, with no one preventing them from travelling.

Also Read:
India and the Taliban: The Case for Constructive Engagement

Blinken told reporters that Afghanistan was the focus of discussions at the Security Council, the G20 as well as in a number of bilateral and multilateral meetings he had during the high-level 76th session of the UN General Assembly currently underway.

“The Taliban continue to seek legitimacy, international support. Our message to the international community is that any legitimacy or support that might flow to the Taliban depends on them meeting commitments they’ve made in key areas, all of which are enshrined in a recent UN Security Council resolution,” he said.

He reiterated that these included allowing foreign nationals and Afghans to travel outside the country, preventing terrorist groups from using Afghanistan as a base for external operations that threaten other countries, respecting basic human rights, particularly for women, children, minority groups, and refrain from carrying out reprisals and forming a genuinely inclusive government that can meet the basic needs and reflect aspirations of the Afghan people.

This is not a favour to the international community. It’s a basic requirement for a stable and secure Afghanistan. And as we hold the Taliban to these commitments, we’re continuing to work with other governments, with financial institutions, with NGOs to ease the flow of humanitarian assistance to Afghans whose lives depend on it, he added.