[1] Sundarban tigers travelling to West Bengal in search of mates 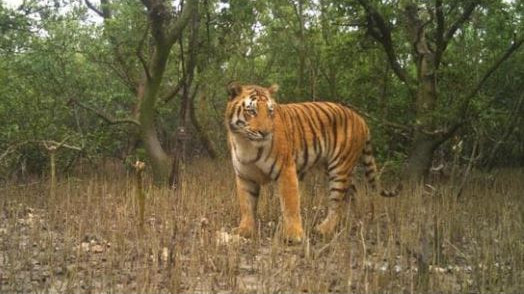 DOT Desk: [2] Tigers from the Bangladesh side of the Sundarbans have been travelling to the other side of the border to look for mates.
“For tigers, there are no borders, so the ones on the Bangladesh side of the Sundarbans in Khulna district keep straying into the West Bengal end of these extensive stretches of mangrove forests, which are among the largest in the world and a UNESCO World Heritage Site,” reports The Statesman, reports TBS.
[3] These strays are usually males seeking female mates, say Indian forest guards who monitor their movements closely so that their influx does not intensify animal-human conflicts that are rampant in the region.
[4] Four such instances of straying were recorded by the forest department of India this year.
Throwing light on the phenomenon, West Bengal’s forest minister, Jyotipriya Malik, said these tigers from Bangladesh usually come to the Indian side during the mating season, which is between November and January.