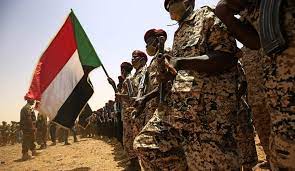 Reuters: [2] A coup attempt in Sudan “failed” on Tuesday, state media reported, as the country grapples with a fragile transition since the 2019 ouster of longtime president Omar al-Bashir.
[3] Top military and government sources told AFP that the attempt involved a group of officers who were “immediately suspended” after they “failed” to take over the state media building.

[4] “There has been a failed coup attempt, the people should confront it,” state television said, without elaborating.
[5] Senior member of Sudan’s ruling body, Taher Abuhaja, said “an attempt to seize power has been thwarted.” Another senior ruling body member, Mohamed al-Fekki said: “Everything is under control and the revolution is victorious.”

Traffic appeared to be flowing smoothly in central Khartoum, AFP correspondents reported, including around army headquarters, where protesters staged a mass sit-in that eventually led to Bashir’s ouster in a palace coup.

Security forces did however close the main bridge across the Nile connecting Khartoum to its twin city Omdurman.

Sudan is currently ruled by a transitional government composed of both civilian and military representatives that was installed in the aftermath of Bashir’s April 2019 overthrow and is tasked with overseeing a return to full civilian rule.

The August 2019 power-sharing deal originally provided for the formation of a legislative assembly during a three-year transition, but that period was reset when Sudan signed a peace deal with an alliance of rebel groups last October.

More than two years later, the country remains plagued by chronic economic problems inherited from the Bashir regime as well as deep divisions among the various factions steering the transition.

The promised legislative assembly has yet to materialise.

The government, led by Prime Minister Abdalla Hamdok, has vowed to fix the country’s battered economy and forge peace with rebel groups who fought the Bashir regime.

In recent months, his government has undertaken a series of tough economic reforms to qualify for debt relief from the International Monetary Fund.

The steps, which included slashing subsidies and a managed float of the Sudanese pound, were seen by many Sudanese as too harsh.

Sporadic protests have broken out against the IMF-backed reforms and the rising cost of living, as well as delays to deliver justice to the families of those killed under Bashir.