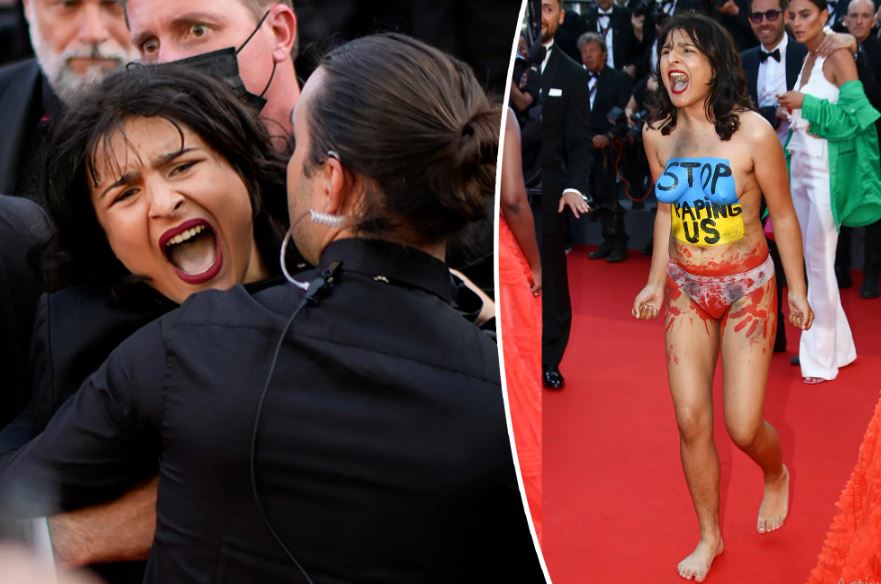 AFP: [2] A woman stripped off on the red carpet at the Cannes Film Festival to reveal her body painted in the colours of the Ukrainian flag with the words “Stop Raping Us” in a solo protest.
[3] Wearing underpants stained red, the demonstrator shouted and posed for photographers before being led off by security guards.

The stunt briefly interrupted the parade of guests in evening wear, including Tilda Swinton and Idris Elba, attending the premiere of their film “Three Thousand Years of Longing” by George Miller.
[4] Ukrainian President Volodymyr Zelensky said last month investigators had received reports of “hundreds of cases of rape” in areas previously occupied by Russian troops, including sexual assaults of small children.
[5] Zelensky, a former actor, launched a video appeal for aid for his country at the Cannes opening ceremony on Tuesday.

[6] The war has already been a major theme at the festival, with a special screening on Thursday of “Mariupolis 2”, a documentary by Lithuanian director Mantas Kvedaravicius, who was killed in Ukraine last month — reportedly by Russian forces.