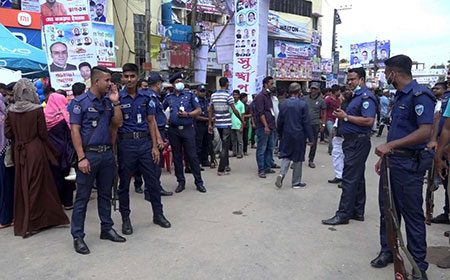 Tasmiah Nuhiya Ahmed of DOT
[2] While waiting to greet the central leaders on the occasion of the extended meeting of Laxmipur District Juba League, 10 leaders and workers of Juba League were beaten. The allegation was made against AKM Salahuddin, president of the district Juba League and chairman of Sadar Upazila Parishad, and his followers, reports Prothom Alo.

[3] The incident took place on the road at the mass grave and Jalepalli area of ​​the municipality at 12:30 pm on yesterday, the report further reads. Salahuddin is the son of Abu Taher, the mayor of Laxmipur municipality and a prominent former general secretary of the district Awami League. However, Salahuddin denied the allegations.

[4] According to party sources and eyewitnesses, the central leaders were scheduled to come to Laxmipur from Dhaka via Ramganj to attend an extended meeting of the District Juba League at a restaurant in the city at noon.
For this, at least 10 former Juba League and Chhatra League leaders stood by the side of Ramganj-Laxmipur road with party leaders and workers to welcome the central leaders. At that time the attack was carried out under the leadership of the president of Juba League.